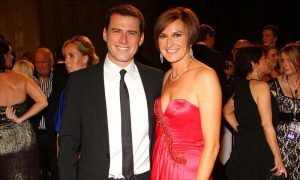 Channel 9 presenter Karl Stefanovic will reportedly pay his ex-wife, Cassandra Thorburn, $35,000 of child support a month, following the recent divorce of the couple.

The 43-year-old, who is the highest paid person on Australian television, making an estimated $3 million a year, left his wife of 21 years in September 2016.

In total, Stefanovic has left $6 million in assets to his wife.

According to a friend, Stefanovic put up little resistance during the negotiations with custody of his children being the main priority. In what was described by friends of the pair as a “tough settlement”, Stefanovic walked away from the marriage with about $500,000 in cash and assets including his white Mercedes.

“There was always the sense that it would be a big settlement and obviously not in his favour,” a friend of Stefanovic said.

“He was quite prepared to walk away with nothing, hand everything over with the one condition that he be able to see his children whenever he wanted.

“And I think they have managed to agree on that.”

The couple will reportedly share custody of their three children, Jackson, 17, Ava, 12 and River, 10.

In an interview with Woman’s Day in 2017, Thorburn opened up about the divorce.

“There were days in the beginning I would get up, put on a brave face and drop the kids at school, then I’d get to the back door and I would lie in a heap for the rest of the day unable to move,” she said.

“I slept on the couch in front of the fire for months because I didn’t want to go near the marital bed. I was in a very dark place.”

“I realised I was going through stages of grief, and to me it was like someone had died.”

“The children still have a father but I don’t have a husband. “He really is dead to me and no, we won’t ever be friends again,” she continued.

More recently, Karl Stefanovic has also opened up publicly about the breakdown of his marriage to ex-wife Cassandra Thorburn in a tell-all radio interview with Kyle Sandilands and Jackie O.

The Today host said, ‘It’s hard. I think for some out there, what happened is here was a guy a couple of years ago who was married with three kids.’

He added, ‘I think this happens to people, and I’m sorry for any hurt that it caused and causes. But this happened to me…and I fell in love not long after that.

‘At the end of the day, it is what it is and I’m sorry if that causes anyone hurt. But I won’t be apologising to my nearest and dearest because I don’t need to.’

The former couple has sold their old family home in Linfield for $3.8 million, and Thorburn now resides in the family’s Cremorne home.

Earlier this year, Stefanovic and his 34-year-old girlfriend Jasmine Yarbrough exchanged vows at a commitment ceremony in Sydney’s Palm Beach.

The ceremony, in which the pair exchanged vows and rings, was not believed to be legally binding.The couple is getting married in Cabo, Mexico, later this year.