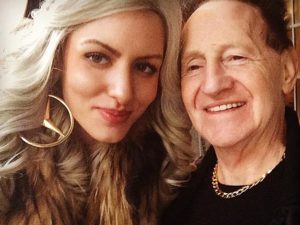 the edeltens – geoffrey and gabi

The 72-year-old will take legal action through lawyers in New York, where the model and former prostitute lives, before he lodges paperwork to officially split in the family court in Melbourne next month.

Mr Edelsten complained to Melbourne East Police in October that the 27-year-old launched a blackmail plot to extort $7000 from him, which he says he paid, when she threatened to go to the media with naked pictures of him — a claim she denies.

‘He didn’t even own anything that cost that much at the point we were at.’

Victoria Police have confirmed that a complaint of blackmail was lodged but it is not being investigated.

Mr Edelsten also told officers she kicked and damaged a $35,000 Archibald Prize-listed painting of him and ex-wife Brynne Edelsten by artist Vivian Falk.

In November he complained to Melbourne East police that two watches, including a Breitling, several gold chains and his favourite DVDs, were taken by the glamour model. 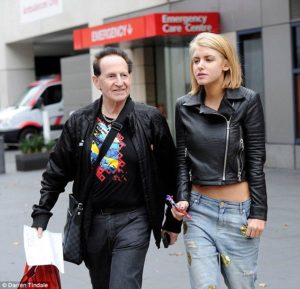 Ms Grecko told The Saturday Telegraph: “I think it’s sad all the things we said about each other when we broke up … I’d be upset if he filed for a divorce because at one point I thought I had found the one.

“I haven’t taken any of his belongings and I didn’t blackmail him. I hope we can talk at some point before any permanent proceedings.”

September will mark a year since the pair have lived separately, freeing either of them to file for divorce.

Mr Edelsten says he “can’t wait to ­officially get rid of her”.

“She has made my life a misery,” he said. “I’m finally enjoying life again and keen to date and proceed with my life and I can’t if I know she’s still in it, even if she is living in New York.

“The fact she has admitted to being a prostitute and part of the mile-high club makes me sick. The sooner we’re divorced, the better — but I want my money first and will be going to New York to get it.” 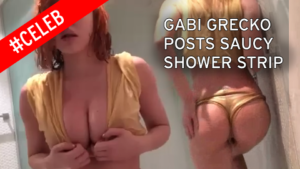 It was claimed in a federal corruption case filed this month that a pair of businessmen paid Gabi to entertain Grant during a flight to Las Vegas in exchange for official favours.

The reality TV star confirmed to the Post that she performed oral sex on the men in the cabin as they ‘laughed’ together.

Gabi, then working as an escort under the name ‘Candi,’ also claimed she had sex with multiple men simultaneously while ‘role playing’ as a flight attendant.