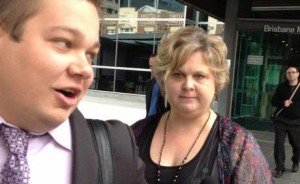 Judy Lorbek outside a Brisbane court

A $2 million spending budget fell into a Sunshine Coast mum’s lap because a child support worker typed the date into the payment field on her computer.

The cash-strapped mother of three paid off the mortgage on her Nambour home, booked in home renovations and took a contract out on a property in NSW.

Crown prosecutor Aimee Aisthorpe told Brisbane District Court on Friday that Lorbek then went on a spending spree – shouting her and her children on expensive holidays to the Gold Coast and Sydney.

Lorbek had also gambled a chunk of the money away in Sydney and on the Gold and Sunshine coasts, losing $10,000 in one go at an RSL club.

She withdrew $130,000 through eftpos and $120,000 in cash in the month before authorities realised their mistake.

Lorbek withdrew the mistakenly transferred money immediately and had opened a trust account and eight other bank accounts.

Lorbek pleaded guilty to fraud when her case was transferred to this higher court.

The Crown has asked for her to serve two years of a six-year jail term.

Lorbek’s defence has asked for five years jail and to serve less than a third of the sentence.

Despite searching more than 300 cases, neither party were able to find comparable circumstances.

Defence barrister Michael McMillan said his client had always been “truly sorry” for stealing the money.

He said Lorbek did not oppose any confiscation of assets associated with her crime, including her Nambour home where she had raised her family since 2001.

Mr McMillan said a psychologist found his client was unlikely to reoffend in this way again.

He said Lorbek had received social security benefits since 1996 but only “plucked up courage” to complain about child support payments in 2009.

Judge Gary Long sentenced Lorbek to six years’ jail with a non-parole period of 18 months. She was ordered to pay the Commonwealth back $432,000.

Lorbek served 45 days in custody before she was released on bail.