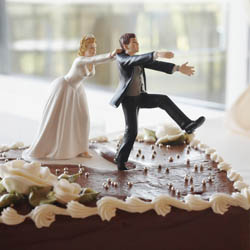 Divorce and separation are as real and certain as death and taxes. Everyone who is in a relationship or married is anxious at the prospect of divorce or separation. Such fears place stress on couples and this can lead to separation. It is rather circular!

People who repartner or remarry are also terrified, not only at the prospect of a further property settlement with their current spouse, but the impact such a settlement of property will have on their estate plan for children from their first marriage or relationship.

The farmer wants a wife … but he does not want a future property settlement that will threaten his farm, his very existence and boot him off the farm.

A business owner is pleased that his business partner has found the love of his life and is about to be married. But he is scared stiff that the new love will be short lived and they will end up in the Family Court fighting over, amongst other things, the business they have built over the last 10 years.

Is there a solution to the mess? The simple answer is yes. A Binding Financial Agreement (BFA) is what the lawyer orders.

From December 27, 2000, a BFA could be entered into between spouses who are contemplating marriage, those who are already married or those who have separated or divorced. (De facto couples were able to enter into Domestic Relationship Agreements for a significant period prior to 2000.) From March 1, 2009, with the rights of de facto couples (including same gender couples) merging with married couples, de facto couples can enter into BFAs under the Family Law Act 1975 (in most Australian states).

Divorce and separation are no doubt stressful for the client as well as the adviser. It is incumbent upon advisers to consider, plan and implement strategies that take into account marriage or relationship breakdown. One wonders how this could be done.

One example that springs to mind is of a client who comes in to see their adviser and tells them to sell an investment because the client intends to ‘give’ their son or daughter the sum of $500,000 to enable the son/daughter to buy a home with their new partner.

At this point, the adviser will need to be vigilant to try and protect the client’s money by suggesting that a Deed of Loan and a mortgage be entered into between the client, the client’s son/daughter and their partner. But is this enough?

Recent cases in the Family Court suggest that Deeds of Loan are not sufficient to protect the client. Why? Because spouses argue that while a deed of Loan was entered into, it was never contemplated that the money would be repaid.

If the court accepts such an argument (and there have been many cases where this has happened), the difference in the court outcome can be significant. Is there a way around this? Yes — a BFA.

There are two types of BFA. The first one deals with all the property and superannuation of the parties whether current or accumulated in the future. The BFA will provide a mechanism for the division of the property and superannuation that exists at the date of separation. That is, the BFA is an evolving document in that it caters for and deals with property that is yet to come into being and provides a way to divide that property on relationship or marriage breakdown.

The second type of BFA is a Mini BFA. A Mini BFA is a BFA that deals specifically with one asset whereby the asset in question can be excluded from any division in the event of separation. However, all other property or superannuation that is accumulated during the course of the parties’ relationship or marriage can be up for grabs in the event of separation. That is, on separation the parties will negotiate a settlement or the court will determine how to divide the parties’ property and superannuation (excluding the asset that is contained in the BFA).

In the example above, if the son/daughter and their partner are not keen on doing a BFA that deals with all the property they may acquire in the future, they could have a Mini BFA that protects the client’s loan of $500,000. This will be achieved by providing that on the separation of the son/daughter and their partner, the property in question will be sold (or one of the spouses will buy the other’s interest out) and the loan of $500,000 (with or without interest, depending on the arrangements) will be repaid to the client.

There are strict requirements that must be followed to ensure a BFA will not be set aside by the court at a future date. Under the Family Law Act 1975, a BFA is binding on the parties to the agreement if, and only if:

1. the agreement is signed by both parties; and

(a) the effect of the agreement on the rights of that party;

(b) the advantages and disadvantages, at the time the advice was provided, to the party of making the agreement;

3. the annexures to the agreement contains a certificate signed by the person providing the independent legal advice stating that the advice was provided;

In that case, the husband sought to set aside the BFA on two grounds, namely, that the agreement was not certified properly because it was amended after the certificates were signed, and that in the body of the agreement, the Statement of Advice referred to in item 2 above was not included.

While at first instance His Honour Mr Justice Benjamin found that it was sufficient that the certificates of advice annexed to the Agreement contained the Statement of Advice (namely, the clients received advice as to the effect of the agreement and they considered the advantages and disadvantages of entering into the agreement), the Full Court of the Family Court held otherwise and the BFA was set aside. That is, the Statement of Advice must be within the Agreement. The Full Court said:

“Care must be taken interpreting any provision of the Act that has the effect of ousting the jurisdiction of the court. The amendments to the legislation that introduce a regime whereby parties could agree to the ouster of the court’s power to make property adjustment orders reversed a long held principle that such agreements were contrary to public policy.

“The underlying philosophy that had guided the court in enunciating that principle was seen to place too many restrictions on the right of the parties to arrange their affairs as they saw fit. The compromise reached by the legislature was to permit the parties to oust the court’s jurisdiction to make adjustive orders, but only if certain stringent requirements were met.”

Care must be taken when drafting a BFA or a Mini BFA to ensure that it is upheld by a court if challenged. It cannot be understated that advice from an accredited family law specialist is required to advise on and draft a BFA. The fact finding session with the client (and the adviser) is important to ensure the BFA or Mini BFA drafted will be one that will meet the client and the adviser’s needs going forward.

The consequences of having a BFA set aside by the court can be disastrous for the client and their future estate planning as well as the estate planning of their children (especially children from a previous relationship or marriage).

A BFA is an asset protection and an estate planning tool that clients need to be aware of. It is by far a worthwhile investment when one compares the cost of litigation on marriage or relationship breakdown.

Litigation is costly in monetary as well as human terms. It can cost your client tens of thousands if not hundreds of thousands of dollars to go through litigation compared to the small investment they make in a BFA.

A BFA is akin to an insurance policy. No one wants to have a car accident, but in case it happens, you are insured and this gives you peace of mind.

One final word: a BFA may not be for everyone. But this does not mean advisers should shy away from considering whether it is a suitable tool for their clients. This cannot be underestimated for the client who has been stung by divorce or separation already.