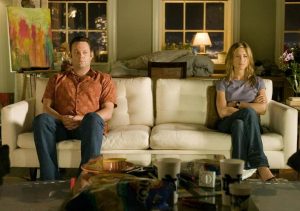 Exorbitant housing costs are preventing split couples from making a clean break – more than one in 10 Aussies say they’ve had to live with an ex just to make ends meet.

One in 25, or about 4 per cent, said they were still living with their ex, sometimes years after the break up, research from Finder.com.au revealed.

Millennials, those currently aged between 24 and 40, were the most likely to be in this living arrangement while Baby Boomers seldom cohabited after a split.

Nearly 30 per cent of Aussies struggled to pay their rent or mortgage each month, additional polling showed. Inner Sydney rents typically demand about $33,000 a year, while mortgage repayments across the greater city area average about $45,000. Melbourne and Brisbane rents average about $24,000 annually.

“In an ideal world, once you’ve fallen out of love, you’d be able to move on both emotionally and physically,” Ms Browne said. “The reality for some is the end of the romance isn’t the end of the roommate.”

Insurance worker Jacques van der Merwe, 38, lived with his ex for nearly six months after they broke up and said competition for rentals made it hard to move into a new place quickly.

“Suddenly you’re on your own so the rent you have to pay doubles. You’re up against 20 other people viewing the same home, most of them couples, who I think landlords prefer,” he said.

A Leichhardt bar worker told The Daily Telegraph she stayed with her ex for nearly a year because both their names were on a lease they couldn’t break early and neither wanted to be the one to move.

She was in a one-bedroom unit and continued to share the same room. “We just kept getting into the same fights again. You couldn’t start dating new people.”

She said she wouldn’t have been in this situation if she had more savings. “I paid most of the rental bond and I couldn’t afford bond for a new place until I got it back.”

Ms Browne said the best way people could protect themselves from an awkward living arrangement was by having money saved for a rainy day.

Psychologist Pandelis Tsomis said those stuck in relationships that have deteriorated can suffer sleep deprivation, increased anxiety and become more distrusting of people.

“You can get in a situation where you’re trying to avoid the house so much you develop dysfunctional coping mechanisms like gambling or alcohol addiction,” Mr Tsomis said.

Relationship expert and psychologist Cindy Nour said living with an ex could only work if it was an amiable split and in some instances it could give the couple a chance to review the relationship.

Mr van der Merwe said there was a happy ending to his story – after living apart he patched up his differences with his ex and they’re back together.