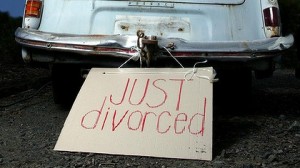 Divorce can add a decade to your working life, according to a new study from an Australian super fund.

In a recent research report titled Untying the Knot, Suncorp Superannuation asked married and divorced people about retirement ages and found that while both groups were on par when it came to ideal retirement ages, there was a big gap when they had to be realistic.

The report also used figures relating to the average age of divorce from the Australian Bureau of Statistics to demonstrate the very different financial positions of male and female divorcees.

I’ll let you cogitate on that, and the vested interests of the report’s authors, for a wee moment before we continue.

Divorce. It happens. And it hurts. Divorce hurts in many different ways. It may be important to think of this before getting married.

But is it a good idea? Is it smart to stop and think about things falling apart before building something up? Is it a good idea to contemplate the demise of a romance before taking it all the way, or will you simply kick-off some sort of negative, self-fulfilling prophecy of doom?

A lot of couples shirk the hard stuff for fear it will ruin things. I sometimes wonder whether this is a sign the foundations of their relationship are shaky at best. Surely strength comes from facing up to brutal truth, rather than stuffing cowardly fingers in ear and shrieking “cant-hear-you” in unison?

Of course, there’s always the likelihood that one person in a partnership may be better equipped to have the conversation than the other. This is an imbalance, but the difference is not always insurmountable.

For we all know that romances work when people agree to support each other, and help each other learn and grow. It could simply be that some help through what would be a difficult conversation for anyone to have is necessary.

If it’s a conversation that needs to be had at all, that is.

Is it? Is talk of divorce before ‘I do’ going to strengthen or weaken your relationship?

Certainly there are practical benefits. Women especially need to wise-up when it comes to finances, and their financial security within relationships. The old idea women should rely solely on their husband to sustain themselves in perpetuity is partly responsible for the great many poor old ladies struggling to pay the bills as they age.

And while that idea is slowly dying, there’s no use pretending all things are equal. Women still earn less than men in Australia. Women are still less proficient in the language of finance and less able to adopt a ‘like a man’ approach to money (read: More likely to take on unnecessary responsibility/charge their decisions with emotion, not reason).

This is partly why I’m pro-pre-nup. It’s not a harbinger of doom, in my books, but simply a sensible document related to a bunch of other documents you’re about to sign, either literally through marriage or by default if you’re de facto.

But the cost of divorce isn’t just financial. Divorce also rips apart families, and causes significant emotional trauma for all parties involved, especially when children are involved. I believe these are other reasons why it might be a good idea to discuss divorce before marriage, if only to underscore the sheer depth of your feeling for one another, and willingness to commit, even in the face of possible devastation.