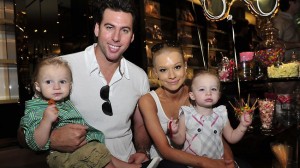 Court documents allege Hackett employed them on retainer between 2006 and 2009.

He says he asked them to draft a financial agreement, which was executed in March 2007, less than a month before his lavish wedding to Alley in Albert Park.

Financial agreements are Australia’s version of a pre-nuptial agreement but can also be made during the marriage or after separation.

Hackett’s personal fortune is understood to be about $8 million.

In court documents, Hackett says the agreement was amended in May 2009. The couple’s twins, Jagger and Charlize, were born in September that year.

The statement of claim alleges the 2007 financial agreement was drafted in a way that did not comply with legal requirements.

It further claims that Mullins Lawyers failed to take the opportunity to fix the problem when changes were made to the agreement in 2009 and did not tell Hackett there was any “defect”.

Hackett accuses the lawyers of neglecting or failing to perform their services with due care because they didn’t ensure the agreement was “effective, operative and enforceable”.

He says he was never told each party was required to have independent legal advice in order for the 2009 changes to comply with law.

“As a result of the breaches … the Plaintiff has suffered loss including legal costs,” court documents say. “The Plaintiff’s loss is continuing.”

The statement of claim alleges Hackett will continue to suffer loss because of Mullins Lawyers’ negligence and asks for damages.

A spokesperson for Mullins Lawyers said yesterday they did not want to comment on the case.

Hackett did not respond to calls.

Hackett’s marriage came to a dramatic end in May when the former swim star drunkenly trashed his Melbourne city apartment.

A piano was up-ended, a door smashed and furniture strewn across the home in what Hackett tearfully told 60 Minutes was an attempt to end the five-year marriage.