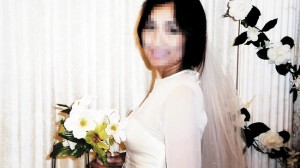 AS she smiled for the camera, the bride knew her wicked plan was on track. Soon she would fleece her new husband of his millions and be set for life.

Dressed in a demure gown and holding a simple bouquet, the bride exchanged vows with the man before her, and in the eyes of the law, became Mrs X.

For legal reasons, The Sunday Mail cannot name the South Korean woman or her husband.

Lonely after the death of his second wife, the Brisbane man, 82, was pining for companionship, and in May 2011, Mr X met his wife-to-be.

The millionaire’s deteriorating health was a blessing and a curse for the 55-year-old bride.

Mr X, once an astute and successful businessman, began losing his short-term memory and the ability to make complex decisions after he suffered two strokes in 2011.

It meant sometimes he also forgot he was married or the name of his new wife.

Between July and November 2011 – only weeks after they met – Mr and Mrs X married three times, in South Korea, Australia and the US.

It wasn’t long after their first ceremony that Mrs X began transferring cash from Mr X’s bank accounts into new accounts that she had set up.

Queensland Supreme Court documents reveal Mrs X moved the money to South Korea, then back to Australia to fund a new company.

Within eight months she had siphoned more than $3 million out of her husband’s accounts and bought three businesses in Brisbane and properties in South Korea.

Mrs X knew arrangements were in place at Suncorp’s Chermside branch that prevented large amounts of cash being transferred without “certain protocols” being met, so each time she took her husband to different branches in Queensland and NSW to move his money.

If it wasn’t for the man’s family, and their application to appoint the Public Trustee as the official administrator of his assets, the “unconscionable” fraudster would have stolen more and got away with it.

Now the Public Trustee has sued her and her company for dishonestly stealing her husband’s money.

And on October 9 last year, becoming concerned that the South Korean national had advised she would soon leave Australia, the Public Trustee sought and won orders that froze her and her company’s assets and interests. It also seized her passport.

But the woman’s passport was returned when she gave assurances to the court she would return to Australia by October 26 to give evidence.

The next day she left the country and has not returned.

In December, Justice Anthe Philippides ordered she repay the Public Trustee more than $3 million on behalf of the ageing Brisbane man.

“I am satisfied that (she) implemented a scheme to orchestrate and effect the transfer of moneys to her and (her company),” Justice Philippides said.

“I am satisfied that (Mrs X) . . . (deliberately took advantage and exploited her husband’s) known vulnerability and mental impairment.”

On January 15, Mrs X filed an appeal but is is not known if the court will grant her leave to file the matter.

Mr X now receives 24/7 care in his home and cannot recall the cruelty inflicted upon him.