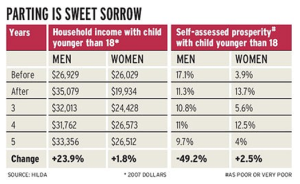 A study by the Australian Institute of Family Studies has revealed the financial and emotional fallout of the average Australian divorcee.

The study tracked the economic prosperity of divorced men and women over five years to 2007, and asked participants to report their overall satisfaction with the financial situation they found themselves in.

The Institute drew on the University of Melbourne’s  Household, Income and Labour Dynamics Survey (HILDA) in reaching their findings.

The study revealed that by a large margin, divorced men on average had much higher incomes after separation than divorced women.

The average yearly income of a divorced man was reported as $33,356, with divorced women averaging $26,512.

However, when asked to describe their own status after the divorce, men reported much higher levels of dissatisfaction and feelings of financial insecurity.

9.7% of divorced men described themselves as ‘poor or very poor’ compared to 4% of women, despite the higher average incomes.

Divorced women, by contrast, were more likely to describe themselves as being in a stronger position after the divorce, or at least no worse than before separation.

Deputy Director of the Institute, Mathew Grey, suggested that the higher levels of dissatisfaction in males may be linked to perceptions of their change in lifestyle.

“They might have more money but many used to have someone doing the cooking and cleaning and organising the social life,” said Grey.

Further factors may include feelings of emotional isolation stemming from having less contact with their children.

“…some are alienated and angry because they don’t live with their children. And a lot of men really don’t want to pay child support.”

Child support payments seemed to be a particular source of resentment for many divorced men.

A further complicating factor may be ownership of the family home. The higher incomes of divorced men do not take into account the value of property, and many divorced men find themselves renting. Older divorced single women were more likely to own a home outright, at 49.4%, compared to older divorced men at 40.9%.

Overall however, the risk of poverty in single-mother households tends to be much higher.

The study raises interesting questions about the capacity of each divorcee to cope with the separation.

To see the full report, and other related studies, visit the Australian Institute of Family Studies website at http://www.aifs.gov.au.WW