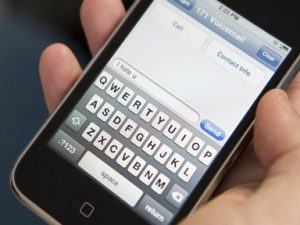 A WAR by text message is the latest battleground for separated families, with fighting couples resorting to foul language and sickening insults as they bicker over care arrangements for their children.

Spreadsheets exposing the unsavoury behaviour have reached biblical proportions, with “hundreds” of pages of the vitriolic SMS texts being tendered in custody battles in court.

While some parents used the technology to successfully juggle shared parenting arrangements, divorce lawyers are facing putting their own clients’ SMS texts under “forensic” analysis.

The Courier-Mail has uncovered one case of an angry wife trying to use a text message spreadsheet to prove her claims that her ex-husband is a drug dealer.

Australian Divorce Blog Founder Stephen Page said SMS was being hijacked by an outpouring of “emotional rubbish” as couples wage war over their children.

“It is a war by text message,” Mr Page told The Courier Mail.

In one text uncovered by The Courier-Mail, a mother sprays a round of insults at her ex-partner as she waits outside his house for their seven-year-old child.

Judges are desperate to rein in the behaviour and have ordered parents to post-separation courses and issued court orders banning denigrating comments.

They have also made orders limiting texts between parents to “emergency matters” and changes to phone numbers.

But Family Relationships Services Australia executive director Steve Hackett said “war on text” was common where couples could not afford to separate.

“They are also at war on the phone or at the school yard,” Mr Hackett said.

Where civility is at a premium, Mr Hackett said some parents are using mobile phone apps to communicate.

“The aim is to avoid an unnecessary heightening of the dispute and if you can communicate in a way to reduce conflict and it cannot be misconstrued there is less room for a heat of the moment argument,” he said.

In another disturbing trend, relatives of young children are also being exposed for sexually abusing, stalking and grooming them through texting and emailing under false names.

In one case, a scheming uncle was charged after being forced to confess he stalked his niece via email and tried to coerce her into taking explicit photographs of herself.

In a series of emails in 2005, he warned the Brisbane teenager he would expose her for sneaking out if she did not take the pictures.