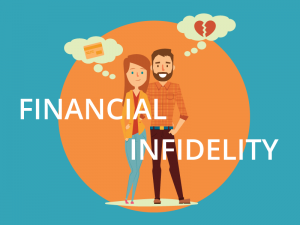 A THIRD of Americans have cheated on their partner … about money. It’s called financial infidelity and we suspect a similar, or greater, proportion of Australians have done the same thing.

In another survey, a quarter of Americans said they would not inform their spouse about financial difficulties, with 9 per cent saying they didn’t want to worry their partner and 7 per cent concerned that being truthful would hurt the relationship.

It’s sad, isn’t it? Whereas most couples pull together in times of adversity, money seems to be treated differently.

A few weeks ago we talked about financial abuse where one partner completely controls another person’s finances and refuses to relinquish that control. They use that control to financially dominate and abuse their partner.

Financial infidelity is different. It’s where someone goes behind their partner’s back and secretly earns or spends money without their knowledge.

Hiding a new clothing purchase (“this old thing”), having a small, secret TAB account to have the occasional punt or splurging on a good night out with friends is one level of financial infidelity.

But then there’s operating secret credit cards, taking out loans to make risky investments and hiding sources of income. This is a much more serious and damaging level of financial infidelity.

That first lower level of infidelity can really be put down to a desire to maintain some form of financial independence, particularly important for the partner who isn’t the major breadwinner.

To be financially beholden to another person, even if it is your partner, can be intimidating and scary for many people.

Everyone should feel they have financial freedom. Libby, for example, has her own savings account to which David does not have access. We never talk about it, she uses it for gifts and going out with girlfriends.

Yes, couples need their own financial space. It allows you to breathe and spoil yourself with little pick-me-ups that keep life in perspective.

But there is a limit. When financial infidelity involves large amounts of money, either earned or spent, without a partner’s knowledge then that “cheating” becomes a serious breach of trust.

It becomes a concern when the money is used for things that fundamentally undermine the values of the relationship.

There are several warning flags that could signal financial infidelity (see below).

If a couple of these red flags start to appear together, you must confront the situation immediately. Often the guilty partner will be relieved to unburden their secret which could have been tearing them apart mentally.

Most financial infidelity originates from a mistake a partner has been too embarrassed to admit, which has then festered and spiralled out of control. To sort the mess out, agree on financial goals and a budget.

If your goals and desires are significantly different, talk about how you’ll set priorities and compromise. Try to realise an understanding about what is important to both of you.

If you have different styles of spending, consider creating separate accounts so each has control over some cash.

Forgive and forget, within reason. But your partner should make some financial sacrifices, such as delaying other buys.

Have regular financial conversations. Follow our rule of setting aside 15 minutes a month to sit down with your partner to talk money and your financial goals and priorities.

* Spending is inconsistent with their income.

* You find unexplained purchases on the credit card statement.

PROPER estate planning is crucial to anyone with assets or dependents to look after, but it isn’t as simple as making a will.

As with most things, it’s all about the detail.

In dealing with all your assets, make sure you have a legally binding death benefit beneficiary nominated with your super fund and on your life insurance policy.

Having a current will gives you the chance to include personal wishes such as an advanced health directive which leaves instructions for how you want to be treated in the event of incapacitation or on life support in hospital.

Also, you can appoint an enduring power of attorney, giving your nominated person the power to make financial decisions on your behalf.

Another aspect to consider is to protect your estate with a testamentary trust.

This ensures your family is protected from losing their inheritance in the case of a beneficiary’s divorce, and can cover issues such as providing for your children in the event of your spouse remarrying or even the divorce an adult child. In this instance, your assets are held by a trustee for your beneficiaries.