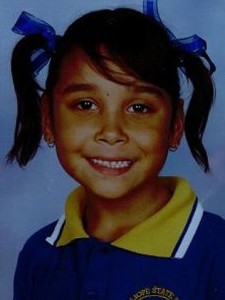 A father who has refused to comply with a court order to return his seven-year-old daughter to Queensland is believed to be living with her in northern NSW.

A lawyer representing schoolgirl Layla Leisha has obtained a Family Court order allowing a public appeal for information about her whereabouts.

It comes after a Family Court ordered missing persons’ report for Townsville twins Isabella and Bronte Watter, who were snatched by their mother Catherine “Cassie’’ Watter in April.

Layla’s mother Deborah Neilsen, 37, and her maternal grandmother have not seen her since late last year.

The schoolgirl, who has lived most of her life with her mother, was supposed to live with her maternal grandmother near Gympie, after a Family Court order in December.

Australian Federal Police believe Layla is still with her father Shahrainier Eric Shem Leisha, 42, known as “Shem’’ Leisha, in the Lismore or Goonellabah areas of NSW.

“The maternal grandmother is feeling upset, she is feeling anxious, not knowing the whereabouts of her granddaughter.

“We don’t know where the child is, whether she is attending school, we don’t know her accommodation details or her current emotional state.’’

A court order for the recovery of Layla was made on March 6.

Before that Layla had spent time with her paternal aunt, Jennifer Jean Leisha, around Inala, Mr Waller said.

Until late last year Layla was a student at Calliope State School and lived in the Central Queensland area with her mother.

Mr Waller said the indigenous father, 42, had lived in different places in Queensland and NSW and did not have a permanent place of abode.

Mr Waller said since March 6 Australian Federal Police had spoken to Mr Leisha, who told them he did not intend to comply with the court order to hand over Layla.

Mr Leisha failed to deliver Layla to the Commonwealth Courts complex in Brisbane on June 23, as ordered.

Layla has dark brown hair and brown eyes and is about 1.4 metres tall.

Anyone with information about the whereabouts of Layla Leisha or Shem Leisha should phone Crime Stoppers on 1800 333 00 or Australian Federal Police on 02 61267926.