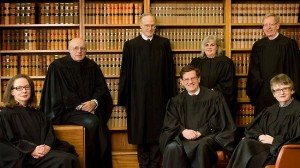 DEMENTIA sufferers will be given stronger legal protection from their children pursuing their estates after a High Court ruling in their favour yesterday.

Lawyers have heralded the landmark decision over a blended family property dispute a victory for the nation’s ageing population. The case centred on the $1.2 million estate of an elderly couple who married for a second time almost 40 years ago.

They each had two children from a previous marriage.

After the wife suffered a stroke, which forced her into full-time residential care, her two daughters launched the now failed property proceedings in the Family Court as her “case guardian”.

The wife died last year while an appeal by the husband was pending against a magistrate’s decision to grant her daughters almost half of the couple’s estate. It would have forced their stepfather to sell the matrimonial home he had lived in for almost 50 years.

The daughters’ legal challenge would have netted them a 42 per cent stake in his superannuation, joint savings and house sale proceeds.

But the High Court overturned the decision on the grounds it was not “just and equitable” to make an order “altering interests in the marital property”, which would have forced the husband out of his home. It found the wife’s needs before her death were being met by her husband.