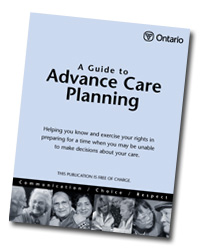 Most Australians are missing out on an opportunity to influence where and how they die, says a study that shows a serious lack of end-of-life planning.

Only one in 20 has an advance care plan, which means doctors might keep most people alive when they would prefer to die in peace.

They could also die in hospital when they might prefer to spend their last days at home.

A lack of certainty about their wishes causes unnecessary anguish for loved ones, says the study released to mark palliative care week.

It shows 50 per cent of Australians don’t have a will when they die, 71 per cent had not indicated their wishes on organ donation and 81 per cent had failed to provide a loved one with a power of attorney over their end-of-life wishes.

An advanced care plan can include anything from where people prefer to die to the level of intervention they want to keep them alive, says Professor Patsy Yates, president of Palliative Care Australia, which conducted the study among people who had lost a loved one.

Legislation differs from state to state, so it is important for people to seek advice from a lawyer or doctor, or from the Palliative Care Australia website.

“It is difficult if people don’t know or are surprised by what you want.”

An advance plan allows people to stipulate if they would prefer to die at home, says Nicole Shenko, a nurse.

“It is distressing for someone who is unwell to have family members argue at the foot of their hospital bed.

“Every person over the age of 18 should have an advance plan.

“It takes away the burden from your family because all they are going to do is follow your wishes.”

Dr Yvonne Luxford, CEO of Palliative Care Australia, says the “kindest thing” is make plans so carers would know “what you want when your time comes”.

“You only die once, so you might as well have your say in it,” she says.