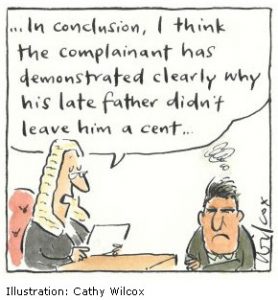 The court warned the Barbanera children about the consequences of not resolving a dispute over the will of their late father.

“The findings in this case, whatever its outcome, would be unlikely to make comfortable reading for any of them or for any of their acquaintances,” according to NSW Supreme Court judge Michael Slattery.

However, the three siblings could not co-operate to prevent the public airing of their acrimonious family history.

Peter took his siblings Nancy and Peter to court after he was left out of his father’s will. He sought up to $300,000 from his father Antonio’s estate, which included a house worth more than $2 million and $50,000 cash.

Antonio Barbanera attached to two of his wills a detailed explanation of why he had excluded his oldest son.

“While living at the family home at Haberfield, he was constantly abusive towards me, my wife and his siblings,” he wrote. “He was often physically violent towards his siblings, beating each of them on a number of occasions.”

In deciding he was not entitled to a portion of his father’s estate, Justice Slattery found John’s relationship with his parents was “extremely turbulent and volatile” and was characterised by abuse, threats and intimidation.

The judge said John behaved in a controlling manner towards his siblings, detailing an incident involving his deceased sister Angela Barbanera.

“I accept that on one occasion in 1983 when John discovered that Angela had a boyfriend, John became enraged and punched Angela very hard in the face, causing her to fall to the kitchen floor with her face heavily bleeding,” the judge said. “He then stepped on her and kicked her while she lay motionless on the floor.”

On another occasion, John chased Angela with a firearm, threatening to kill her, after she ended a relationship with one of his friends.

The judge criticised John’s obsession with Nancy’s romantic life as a teenager, and his claim that she had an affair with a married man.

“He demonstrated an unshakeable sense of entitlement to judge the private life of his female siblings that was difficult to comprehend,” he said.

The judge was also critical of Nancy, who he said displayed “profound revulsion” and an “uncontrollable courtroom abhorrence” of John.

“At one point in her testimony, Nancy turned to John in the court room, ignoring both counsel and the court, and delivered an obscene and vitriolic rant directly towards John,” he said. “She accused him of many things, but in substance of ruining her life.”

Justice Slattery said Peter nursed a “powerful resentment” against John based on their childhood and a falling out over business that involved Peter attempting to hit his brother with a crowbar.

The judge said Nancy and Peter tried to keep John away from their dying mother. They also humiliated John and his wife Pina Barbanera at their mother’s funeral by hiring security guards to watch him.

“The other major act of humiliation was the complete deletion of John’s name from mention at the funeral,” Justice Slattery said. “So effective was this that I accept Pina’s evidence that after the ceremony, the priest conducting Maria’s Requiem Mass approached John and her to apologise.”

But Justice Slattery rejected John’s claim for family provision because of his “comfortable” financial position of more than $5 million as well as his “capacity and a propensity to work” despite health issues. Other family members, in contrast, had “real and oppressing financial concerns”, he said.

The judge also pointed to the “tumultuous family history”, describing John as “the prime aggressive mover in creating family chaos and disharmony over the years”.

Prue Vines, a professor in the University of NSW Faculty of Law, said John’s history of violence did not necessarily mean he should be cut out of his father’s will.

“In this jurisdiction the testator is supposed to be wise and just, and sometimes forgiving as well,” she said. “It is the combination of the violence, unwillingness to end the estrangement along with the fact that he was clearly the best-off sibling that meant there was no evidence that he had been inadequately provided for.”

Professor Vines added: “This is an extreme case of a family’s dirty laundry being exposed. It is extremely sad.”

Phillip McGowan, the director of De Groots wills and estate lawyers, said taking a will dispute to court can be highly emotional and is usually expensive.

“While a legal resolution may be obtained, this is often at the expense of personal or family ties or emotional wellbeing,” he said.