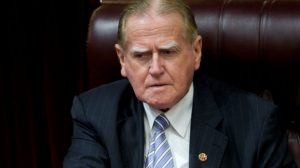 The bill would amend the Crimes Act to make it a crime to harm or destroy a child in utero.

Its opponents have said the bill is a stalking horse to restrict women’s abortion rights.

Mr Nile has rejected this, and said the wording of his bill explicitly exempts medical procedures, including terminations or abortions.

Abortion remains a crime in NSW.

Mr Nile told Fairfax Media his opponents were misleading in suggesting it was an “anti-abortion bill”, saying it was intended to help mothers who lost their unborn babies in car accidents or domestic violence incidents.

Mr Nile, who leads the Christian Democratic Party, has introduced separate bills seeking restrictions and other new rules around abortions.

A spokeswoman from the Premier’s office said the bill would be considered by Cabinet and the party room in line with usual procedure. The government may then elect to bring the matter to a vote.

Mr Nile was hopeful the new membership of the upper house since the 2015 election would give him the support to get the bill through in a vote.

Zoe’s law passed the lower house in a conscience vote in 2014, but Mr Nile withdrew it ahead of a vote in the upper house, where it faced defeat.

It is known as “Zoe’s law” after NSW woman Brodie Donegan lost her unborn daughter Zoe after she was hit by a drugged driver on Christmas Day 2009, when she was 32 weeks pregnant.

At the time, the law was criticised by the NSW Bar Association and the Australian Medical Association for potentially conflicting with abortion laws by giving legal personhood to a fetus.

The resurrection of the bill provoked an angry response from Labor and the Greens, who have introduced their own bill to decriminalise abortion in NSW.

“Defining a fetus as a ‘child in utero’ would be a fundamental change to the law, establishing the fetus as a separate legal identity to that of the mother,” said Greens MLC Mehreen Fahruqi.

“This has wide-reaching implications, including serious ramifications for a woman’s right to choose.

“Fred Nile says there is an exemption for medical procedures, but this does not provide any legally meaningful safeguard against the overarching conceptual change represented by the bill. Since the legal status of abortion as a medical procedure is ambiguous while it remains in the Crimes Act, this bill will further endanger access to abortions.

On her first day in the job in January, Ms Davies confirmed that she personally opposed abortion but Ms Berejiklian, who has supported abortion rights, said that there was no pending change to Liberal Policy.

Labor’s Penny Sharpe said: “This is an unwelcome move from Fred Nile, the previous LC [legislative council] saw fit to reject this bill and I hope that they will do so again if he brings it forward.”