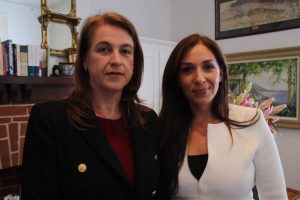 Barrister Teresa Farmer and solicitor Maria Loukas were approached to investigate whether divorce was possible.

New same-sex marriage legislation came into effect on the weekend, prompting a rush of couples heading to registry offices around the country to file their intention to marry.

But in Perth, lawyers were lodging documents of a different kind, on behalf of a woman set to become the first in Australia to file for a same-sex divorce.

She married her long-term partner in 2015 at a consulate in Perth under the laws of a European country where same-sex marriage was already legal.

But things did not work out and the pair separated.

The woman quickly realised getting a divorce would be far more complicated for them than for a heterosexual couple.

She engaged solicitor Maria Loukas and barrister Teresa Farmer to investigate whether it was possible at all.

“The difficulty for this particular couple was having married under legislation of a European country, they couldn’t access the divorce system in that country because they weren’t residents in that country, neither of them were,” Ms Farmer said.

“They were very much caught with no other option.”

Ms Loukas said being stuck in a marriage she did not want to be in had caused her client a great deal of angst.

“For her it’s been about not being able to move on with her life,” Ms Loukas said.

“It’s been about not being able to tidy up the end of something to be able to start fresh somewhere else.

“She’s been held back in many ways.”

But the amendments to Australia’s marriage act, that passed through the Parliament last week, meant that the couple’s union was instantly recognised in their home country, and so was their eligibility to file for divorce.

“They’re no different to any other married couple and there will be a rate of failed marriages,” Ms Farmer said.

“But had Australia not changed the law, I don’t know what would have happened for this couple.

“It’s a shame it’s taken as long as it has but it provides an equality for all married couples on all bases, so it’s important.”

Lance Tapsell has been a marriage celebrant for 10 years and has officiated a number of same-sex civil unions in that time.

He is hopeful divorce rates between same-sex couples will be lower than their heterosexual counterparts.

“I’d like to hope there wouldn’t be a large take up of that but it’s like a lot of partnerships or relationships; something sours and people move on and that’s just part of life in the 21st century, I guess,” Mr Tapsell said.

“I think that gay couples would probably take their wedding or marriage a lot more seriously because they had to fight so hard to get it.”