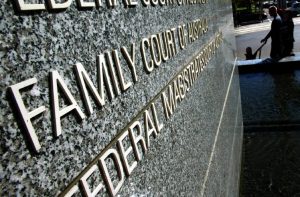 Australia’s family law system is failing to protect children by misleading separated parents into believing their children have to spend time with their ex-partner, even if they are dangerous, one of the nation’s largest children’s charities has warned.

Save the Children Australia chief executive Paul Ronalds said in his organisation’s submission to the parliamentary inquiry into family law that “Australia’s family law system is still not dealing with child protection issues adequately or appropriately”.

Separated parents are entitled to a presumption of “equal shared parental responsibility” under Australian law, which means courts start from a presumption that each parent gets an equal say in major decisions about their children, not equal time with them.

But the Australian Law Reform Commission, which delivered a major report on the family law system last year, found the provision was being misinterpreted to mean both parents should see the child for the same amount of time.

“The widespread nature of that misunderstanding has a number of effects, including leading unrepresented parties to believe they have no choice but to agree to equal time and to enter into informal agreements based on a misapprehension of the law,” the ALRC said in its final report.

Mr Ronalds said: “The presumption is harming children by leading to them being placed in contact with parents where such contact is unsafe.”

The presumption does not arise in cases of abuse or violence, but Mr Ronalds said the family law system was also bad at evaluating those claims.

“Our concern is that the system is still failing to listen to the very people it is entrusted to represent and protect – children,” Mr Ronalds said.

The family law inquiry, one of several recent examinations of the contentious area of law that governs topics including what happens to children when a couple gets divorced, was established by the government in September after pressure from One Nation leader Pauline Hanson.

Professor Patrick Parkinson, a family law expert and dean of the University of Queensland law school, said for the inquiry to be effective, it had to build on dozens of other family law reviews that had been left to gather dust.

“A vast number of reports have been written about the family law system over the last 20 years,” Professor Parkinson said in a submission to the inquiry. “Some reports get no governmental response at all. Others are cherry-picked.

“There is no reason to believe that the report of this committee will suffer any different fate from the previous ones unless it offers a thorough review of the many wise recommendations that have been previously made, and thereafter not implemented.”

The ALRC’s report from last year cites 22 state and federal government-sponsored reports on different aspects of family law in the past decade.

The inquiry is due to report in October 2020.