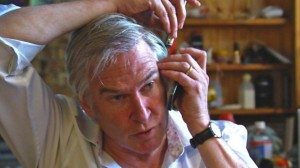 Although many remain unconvinced of his innocence, the as-yet un-resolved issue of his secret recordings of his wife’s phone conversations is still making its way through the system.

His reasoning for needing to record his wife’s phone conversations remains far-fetched, but it has been sufficient it seems given that midway through a subsequent trial on illegal phone tapping, the case was thrown out, with the judge ruling Mr Rayney had no case to answer.

Rayney is now battling it out with the Legal Practice Board, where he is striving to regain his practicing certificate.

His practising certificate was taken from him because he was deemed to not be a fit and proper person to hold a practicing certificate, given that he engaged in these recordings without the knowledge or consent of those being taped.

His justification for the recordings, he believed it was legal to record conversations without consent – and when one was not party to them – to protect a “legitimate lawful interest“.

Another prominent Australian who is also using the defence of “legitimate lawful interest” to justify his countless of hours of phone recordings, many of which are extremely damning on him regardless of whether the recordings themselves are deemed to be lawful or not.

“I was a specialist fraud prosecutor; I understand the importance of evidence and maintaining it.

“I’ve been assembling evidence with great care and effort for four years now.”

According to McDonald, Lawler’s intentions legitimise his actions.

“It is legitimate to record conversations to be used to protect oneself later, which is clearly the advice and opinion of Vice President Lawler,” he said.

“By having the recording, it provides first class evidence so people can focus on the real issue.

“Judges are not troubled by the issue of who to believe in an oral conversation because it is recorded.

He added that everyone benefits when evidence is clear and unambiguous, as it is in a recording.

“It also allows the conflicting party to respond knowing precisely what the allegation is,” McDonald said.

McDonald also said that Ross – whose conversations were recorded by Lawler – can provide a response, if he wishes to do so, to the allegation that the secret tape recordings are in stark contrast to his public statements.

“One would expect that President Ross would make a detailed response without the need for a costly public inquiry or Royal Commission to investigate what is really going in the Fair Work Commission,” McDonald said.