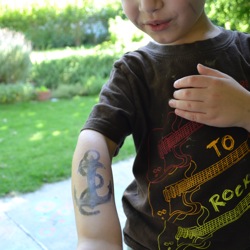 A FATHER has been banned from sticking transfer tattoos on his four-year-old son.

A court heard the boy was caught in a conflict between the different personalities of each of his parents.

His father had a free-flowing attitude to life and a more relaxed household.

The Family Court heard the father “from time to time” put the transfer tattoos on his son because it was something he enjoyed doing.

But when the boy went back to his mother’s house they were immediately removed, a process the boy described as “painful”.

Justice Margaret Cleary said this left the boy in a difficult position even though it was not a matter of any significance.

“It is not the issue of the tattoo itself, it is respect for the child’s dilemma,” Justice Cleary said.

“It should not happen that the child runs into trouble over having those tattoos on him.

“It simply should not happen, not because it is good or bad, but because it creates a difficulty for him.”

Justice Cleary said it left the boy with the dilemma of some behaviour being acceptable in one house but one for which he could be “very sharply reprimanded” in the other.

The court heard the parents had a very poor relationship, communicating through text messages and not seeing each other face to face.

Justice Cleary said the boy had never had a chance to see his parents in any kind of positive light.

Despite this, the court heard they had been able to agree on most issues but were in serious dispute about how much time the boy spent with each parent.

The father was not involved in the court hearing but “has a genuine interest and commitment” to his son.

The boy’s preschool had reported he was “struggling”, tired and emotionally fragile.

He had become physical with other students and was not inclined to engage with others during the day.

Justice Cleary said it might be a symptom of the difficulties he was having living in two households.

She made orders to improve communication between the parents and for the son to spend more time with his father.