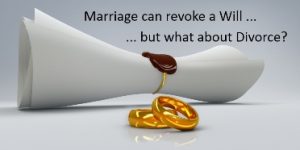 Revoking a will means that the will is no longer valid. When someone dies, the most recent will (if executed correctly and unrevoked) determines how their estate is controlled. If that person dies with a revoked will, and a new will has not been made or an old will has not been revived, that person will die intestate (without a will).

One of the fundamental characteristics of a will is that it may always be revoked. Revocation may either be voluntary or by operation of law.

A will may be revoked voluntarily by:

In the case of voluntary revocation, it must also be shown that the testator had the necessary capacity to revoke the will and did so with the intention to revoke.

A will may be revoked by operation of law by:

Revocation by operation of law does not require an intention to revoke.

The five methods of revocation:

Most wills have a clause revoking prior wills, such as “I revoke all former testamentary dispositions”. On the other hand, expressions such as “last will” and “last and only will” do not properly express an intention to revoke previous wills.

Where there are inconsistent testamentary instruments, in certain circumstances the court may revoke only part of the first instrument, so that the instruments can be read together. However, where wills are very similar but distribute the testator’s estate differently, the second will is taken to revoke the first will.

Any writing declaring an intention to revoke a will is sufficient, provided that the declaration is executed in accordance with the same formalities required for the making of a will.

To revoke by destruction, the testator must intend to destroy the will, and actually do so. While the will need not be totally destroyed to be revoked, a mere effort (such as crossing through the will) is insufficient. Destruction needs to be something more substantial, such as obliterating an important part (or parts) of the will so that it becomes illegible. It is still possible, however for a will to be only partially revoked by destruction, leaving the balance effective.

Where a testator’s last will cannot be found, it is presumed that the testator has destroyed it. However, to be able to rely on this will, you must prove:

A will is revoked by the marriage of the testator, irrespective of the testator’s intention. If the testator does not make a new will after marriage, the rules relating to intestacy will apply. There are, however, exceptions to this rule including, for example, if a will was made in contemplation of marriage.

A will is revoked by the ending of a marriage on or after 9 February 2008, except where there is evidence establishing an intention for this not to happen (such as including a statement to this effect in the will).