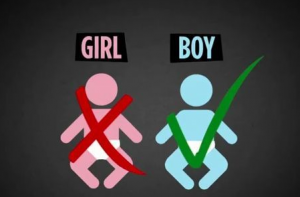 COUPLES expecting baby girls have demanded abortions because they wanted a boy instead, doctors have revealed.

Obstetricians have proposed parents be banned from knowing the sex of unborn babies until it is too late to terminate, to prevent gender-based abortions.

One of Australia’s biggest abortion clinics has revealed that parents have requested abortions on gender grounds – although it is “extremely rare” and always refused.

But News Limited has discovered a couple in Melbourne aborted their baby after discovering at 19 weeks they were having a girl – when they wanted a boy.

The couple’s GP, Dr Mark Hobart, refused to give them a referral to an abortion clinic and reported the specialist who later terminated the pregnancy to the Medical Board.

“The parents were upfront and told me that was the reason for the abortion,” Dr Hobart said.

“To get a request for an abortion for that reason, I just couldn’t believe it.

“It was the husband who did all the talking – he was so insistent.”

Despite being refused a referral by Dr Hobart, the mother had an abortion a few days later.

The Medical Board told Dr Hobart on Friday it would not pursue the matter because Victorian doctors are allowed to terminate pregnancies of up to 24 weeks.

The inquiry is also investigating “the prevalence of gender selection – with preference for a male child – amongst some ethnic groups”.

Senator Madigan yesterday said that “we do know there are cultures where a boy is preferred over a girl”, although he did not have statistics on the prevalence in Australia.

The National Association of Specialist Obstetricians and Gynaecologists has suggested that laboratories which perform publicly-funded chromosomal tests during pregnancy be banned from revealing the sex of the embryo until after 20 weeks, except in cases of gender-based diseases such as Haemophilia.

Dr Foote said while he had no first-hand knowledge of gender-based abortion “I think it does happen.”

“The view among my colleagues is they’re definitely against it,” he said.

“But if (patients) were of a view they must have a baby of a particular sex, they could turn up at a termination clinic and say it is for social reasons.”

Dr Foote said that keeping the baby’s sex secret until 20 weeks would be a “reasonable safeguard”.

But Australian Medical Association president Steve Hambleton said women had the right to know everything about their pregnancy.

The Fertility Control Clinic – Victoria’s biggest abortion provider – told the Senate inquiry that 96 per cent of abortions are performed before 12 weeks’ gestation, when it is too early to know the sex.

“It is extremely rare for us to receive requests for gender selection abortion and we do not acquiesce to such requests,” the clinic’s submission states.

“It’s very rare, and we have to say (to the patient) we don’t provide abortion on the basis of gender,” she said.

“But there would be nothing to stop a woman from going elsewhere and giving a different reason.”

Royal Australian and New Zealand College of Obstetricians and Gynaecologists president Michael Permezel said there was no evidence that babies were being aborted because they were the wrong sex.

“I don’t think there is any doctor that would perform an abortion on those grounds,” he said.

A spokesman for Health Minister Tanya Plibersek said surgical termination of a pregnancy was a “clinical matter”.

“As with all other clinical matters, it is a matter for the professional clinical judgment of a doctor in consultation with a patient,” he said.