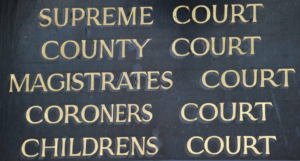 Bendigo’s VLA office will not be directly affected by staffing cuts recently announced by the organisation, but eligibility restrictions will mean many defendants miss out on representation when the demand on the legal service is at its highest.

Mr Docherty said demand for legal aid had risen significantly in Bendigo due to an increase in intervention orders, as well as the deployment of extra police and child protection workers, which resulted in more cases coming before court.

He said the VLA changes – to be brought in on January 7 – would have a huge impact on Bendigo.

“There will be a much greater reliance on the duty solicitor, which is already quite stretched,” he said.

“The duty solicitor is able to give some advice but they are not going to be able to represent everyone,” Mr Docherty said.

“It will mean more and more people go in unrepresented, and that will clog up the system.

“These people don’t have the skills necessary to present their case. When you’ve got someone who doesn’t even know where they need to stand in court… it takes up a lot of time.

It’s going to create longer delays and more injustices because they won’t be able to present their defences appropriately.”

VLA announced last week it would cut staffing levels by four per cent in a bid to combat rising costs from increases in private lawyers’ fees.

Mr Warner said Legal Aid had to prioritise its services for those with the greatest need.

The changes will affect all of VLA’s program areas – criminal law, family, youth and children’s law and civil justice – and will include limiting funding of parents in family law matters, lifting the threshold of assistance for people with unpaid fines, capping instructing solicitor fees in indictable crime trials, tightening rules on funding criminal appeals, and restricting funding in child protection matters.

Mr Docherty said he was worried that eventually the cuts would go so far that people would have to be facing immediate imprisonment to qualify for legal aid.

He said that was already the case for most driving matters, and he expected to see more and more of these matters being passed onto duty solicitors.

“People come in at 9am and they can wait two or three hours before they are actually seen by the duty solicitor,” he said.

“Depending on the complexity of the matter there sometimes isn’t enough time to see everyone, well there is now, but there won’t be soon.”

Mr Docherty said there needed to be more funding from both state and commonwealth governments and a revaluation of how that funding was used.

“We work diligently to protect our clients, but you’re hamstrung when you might have 25 clients to see in the day and you’ve got to get the matters in court,” he said.