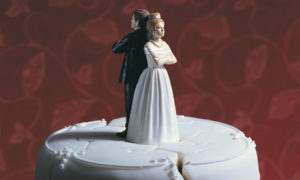 THE federal government is facing a revolt over its $102.4 million increase in court fees, with solicitors warning that some of their poorest clients can no longer afford a divorce.

They believe the government’s new divorce fee is so high it will limit access to the justice system for women who rely on social security after the breakdown of their marriages.

The revolt has emerged at the Senate inquiry into government regulations that have almost doubled the standard court fee for divorce since 2010.

Those changes have been accompanied by new rules that prevent the courts from waiving divorce application fees in cases of financial hardship or for welfare recipients.

Solicitor Anne Lightowler, of Victoria’s Whittlesea Community Legal Service, told the inquiry several women who had experienced domestic violence had told her they could no longer afford a divorce.

“This is particularly difficult for my female clients who have been the victims of domestic violence and want finalisation over what has been a very distressing period in their lives,” Ms Lightowler said.

She told The Australian: “I’ve had a few clients tear up because they just can’t afford the fee.”

Since 2010, the government has introduced changes that have increased the cost of applying for a divorce from $432 to $800.

The most recent fee increases were unveiled last year by former attorney-general Nicola Roxon without consultation with the Law Council of Australia, the profession’s peak organisation.

Before 2010, those on welfare or experiencing financial hardship could be exempted from the fee imposed on applications for divorce but the government introduced a $60 fee in 2011 and increased it in January to $265.

“This represents almost the entire weekly Newstart allowance and over 80 per cent of the weekly single parent payment,” said Kirsty Irving, of the indigenous women’s legal program at Women’s Legal Services, NSW.

Unless a fee waiver was available for divorce applications, she believed the increased fee meant the choice of applying for a divorce would not be available to many of her clients.

“The prohibitive cost will disproportionately affect women who have primary responsibility for the care of children and who are also reliant on social security,” Ms Irving said.

Lesley Kirkwood of the Women’ s Law Centre of Western Australia fears some parents who are experiencing financial hardship will bypass the family law system and establish their own informal arrangements.

“In situations of family violence, it is important that women are able to formalise parenting arrangements so that if there are genuine concerns for a child’s safety, this may be brought to the court’s attention,” she said.

“An informal agreement can lead a perpetrator of violence to have significant control over parenting arrangements.”

Ms Kirkwood warned that the fee regime was so high it would have the unintended consequence of creating “a system of divorce that is only accessible to middle and high-income earners”.

The concerns of these solicitors are outlined in submissions to the inquiry into fee increases across the federal network of courts that is being conducted by the Senate’s legal and constitutional references committee.

However, the government believes applicants for divorce usually have enough time to prepare for the cost of the new fee.

“Divorce applications generally have long time requirements, so applicants have time to make allowance for the fee,” said a spokeswoman for Attorney-General Mark Dreyfus.

“When a divorce application is urgent, the fee can be deferred to allow the matter to proceed.

“These fee changes mean an additional $38m will be put into improving services for court users, particularly in regional areas.

“They have also allowed the government to bring back fee exemptions for disadvantaged litigants,” the spokeswoman said.

The inquiry, which is chaired by Greens senator Penny Wright, has been told that fee waivers are not available for divorce applications.

The government’s plan to spend $38m on the courts amounts to 37.1 per cent of the $102.4m in extra revenue that the Attorney-General’s Department believes will be generated from the fee increases over four years.

Australian Lawyers for Human Rights told the inquiry that unless fee waivers were available for all family law matters there was a risk the fee increases “will disproportionately impact upon victims of domestic violence seeking a divorce or nullity to assist them in ending a violent relationship”.

In the Federal Circuit Court, the standard $800 application fee for a divorce can be just the beginning for family law matters.

In 2010 there was no additional fee for each extra hearing day, but from January this year, a daily fee of $560 was imposed.

In the Family Court, a daily fee of $765 has been imposed for each hearing day in defended matters, excluding the first day. Before 2010, that fee was $534.

The fee increases will have their biggest impact on those who use the Federal Circuit Court — which deals with most family law matters.

The government has required this court to impose an additional $63.3m in fees over four years, according to details provided to a Senate estimates hearing in February.

The concerns by community legal centres are in line with the views of the Law Council.

Its submission to the inquiry says the inequitable impact of the new system is particularly apparent in divorce proceedings where the standard fee of $800 is charged for hearings that last, on average, five to 10 minutes.

“It’s difficult to fathom how $800 could be considered ‘reasonable’ in the circumstances,” the submission says.

The Rule of Law Institute told the inquiry it was “antithetical to the principle of access to justice that divorce applications should be made financially inaccessible”.

“Often, divorce is accompanied by serious economic consequences for the parties and the filing fee may add to those difficulties by effectively penalising the person who makes the application for divorce.

“Access to justice should not be denied to people because of their financial vulnerability,” the institute’s submission says.