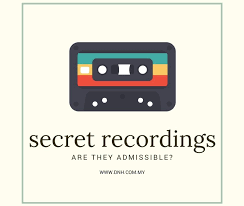 Australian judges are increasingly being presented with covert recordings of family disputes in Family Court trials. Even though they’re frequently made illegally, that doesn’t necessarily stop then being admitted as evidence.

If you wanted to provide evidence of a family member mistreating you or your child, chances are you might look to your smartphone.

It’s becoming common practice for Family Courts in Australia to be presented with home-recorded audio and video material.

But when are they actually admissible as evidence? Are they even legal?
In many Australian jurisdictions it’s illegal to surreptitiously record a conversation. In others, secret recordings can be made but it’s illegal to publish or communicate those conversations.

The Chief Justice of the Family Court of Australia, Diana Bryant, says under certain circumstances, such recordings can have significant probative value—that is, provide non-prejudicial evidence that contributes to a trial.

In the 2014 family violence case of Gorman & Huffman, Justice Hannam said she was inclined to allow unlawfully obtained recordings to be admissible as evidence.

Dave (not his real name) was encouraged by police to make recordings of interactions with his ex-wife after she made serious allegations against him, which the Family Court labelled as ‘groundless’.

‘I was advised by a police officer to record any contact,’ he says. ‘”She is out to get you” were the words that were actually said to me.’

He made recordings of his ex-spouse during conversations in front of their children, and used them later in his affidavits. But recordings made by a family member in the aftermath of a dramatic violent event were ultimately deemed inadmissible by the court.

Involving children can be considered ‘problematic’
‘My ex-wife’s partner hit me with a car and stabbed me five times and I was in hospital in a very serious condition,’ Dave says.

‘They were recordings that my sister made when she was arranging for my children to come and see me in the hospital, and that would have certainly given rise to some concerns about the attitude of my ex-wife.

‘They were inadmissible as they were, as the judge put it, illegally obtained.’

Recordings can backfire in eyes of the courts
The executive officer with the New South Wales Women’s Legal Service, Helen Campbell, says the courts have to be extremely wary of recordings involving children in acrimonious high conflict separation disputes. The court tends to believe involving the child in a covert recording is a manipulative situation and is using the child for the furtherance of a dispute between the parents, Campbell says.

In some cases, the judge has said that this lacks insight, and has even gone so far as to say it’s nearly child abuse, to use the child to perpetrate your arguments for you in that way! She says parents can go to extreme lengths to produce recordings involving their children, but it can actually serve to backfire in the eyes of the courts.

‘There was a case where the parent secretly put a recording device in a child’s toy, just for the purpose of recording what was being said at the time of handover,’ she says.

‘I believe that the evidence was admitted, but it was considered negatively against the person who made the recording as well as the person who was recorded. But the judge thought both parties were equally not good.’

Earlier this year, Justice McLennan warned of an ‘opening of the floodgates’ with parents submitting recorded material to the Family Court.

Yet it seems even in instances where recording have been made illegally, judges will continue to grant them serious consideration for admission as evidence if they are deemed to have sufficient probative value.