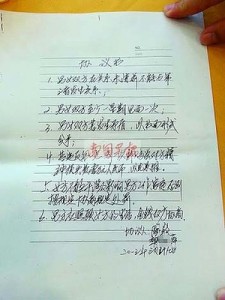 A Chinese official has become an online laughing stock after the publication of a bizarre “love-affair contract” which he had obliged his mistress to sign.

The six-clause code of conduct, which was published by the Beijing News, set out the ground rules for a secretive affair between Tao Yi, a senior tax officer from Guangxi province, and a married woman who was named only as “Ms Fan”.

The six clauses – drawn up on a lined piece of A4 paper and dated March 2013 – stipulated:

1 No sex with third parties while the two sides are still in a relationship.

2 Meet at least once a week.

3 If the two come into conflict any break-up must be announced in written form.

4 If one party violates clause one, there will be a one-off compensation payment of 10,000 yuan [$1700] for mental damages to the other party.

5 The woman shall not interfere with the man’s work or family, or she will be punished accordingly.

6 The man shall take care of the woman’s living costs as per their agreement.

The contract was ridiculed by users of the Chinese microblogging site Weibo.

“With President Xi Jinping currently waging a high-profile war on corruption and debauchery, the leaked agreement represents a flagrant breach of Mr Tao’s contract with his Communist Party employers in the city of Guigang.”

A government spokesman told the Beijing News that Mr Tao had been relieved of his duties. The tax bureau and officials from the city’s disciplinary committee were investigating.

Mr Tao is the latest in a string of Communist Party officials to find his name caught up in a career-extinguishing sex scandal.

In August, state media called for officials to be banned from nightclubs after a group of Shanghai judges were caught cavorting with sex workers.

Earlier this month, officials in central China were accused of operating clandestine, whisky-fuelled karaoke sessions inside their local Party School, where Communist officials are supposed to learn about Mao Tse-tung.