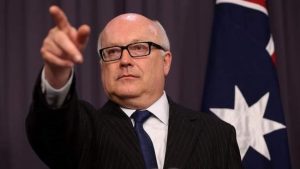 BITTER custody battles dragging on for years could be cut short by local magistrates under a government plan to spare families “emotional trauma’’ in the Family Court.

Federal Attorney-General George Brandis called on judges and magistrates yesterday to start ruling on custody and property disputes to take pressure off the overloaded family and federal circuit courts.

Senator Brandis described the system as overly combative in an exclusive interview with The Daily Telegraph to mark the biggest shake-up of family law since the introduction of no-fault divorce in 1975.

He said the Family Court should be a “last resort’’, with greater use of state courts, arbitration and mediation to settle custody and property disputes.

“The litigation model is not always the best model,’’ he said.

“Every story in the Family Court is a bad story — there are no good stories. We’ve got to design the system to ensure the disputes finish on fair terms as early as possible, rather than being dragged on with delays, expense and trauma.

“We want people to be able to get on with their lives.’’

Mr Brandis also called for “consistency’’ in the way judges apply the rules of evidence in family law cases to stop warring spouses lying in court.

“The special rules limiting the reception of evidence in the Family Court (from parties with) invented allegations need to be applied consistently,’’ he said.

“People in the family law system are … seeking to protect children, to preserve dignity when they feel they’ve been abused. If they’re negatively motivated, they may be seeking to avenge themselves.’’

“(I want to) encourage state courts to exercise jurisdiction under the Family Law Act — which they can do, but they don’t,’’ he said.

“There should be less overlap and less double-handling.”

The Turnbull government has given the Australian Law Reform Commission 18 months to find ways to modernise the family law system.

Mr Brandis said he wants “the smoothest, most cost-effective, least traumatic, most expeditious way’’ to resolve divorce and custody disputes.

The government is spending $12.7 million to trial a “lawyer-free’’ arbitration system in Sydney, with the first “parenting management hearings’’ to be held in Parramatta this year.

Teams of psychologists, social workers and family law experts will help parents resolve custody issues in the best interests of the children — without using lawyers.