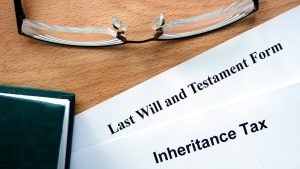 Australian taxpayers are “bound to” be hit with an inheritance tax, a financial adviser has said, pointing to similar policies in the UK and US.

Chief of financial advice firm Stanford Brown, Jonathan Hoyle, said an inheritance tax was an inevitability in Australia as the country’s current position was unusual and unsustainable.

The next step will be an inheritance tax.

He said that as an adviser, he works with high net-worth clients who begin considering their retirement in great detail in their 50s.

“Retirement planning is a three-decade process – for couples in their 50s, this [plan] is going to last a long, long time.

Australia abolished death duties in 1979 due to their relatively low exemption thresholds, poor consideration for the effects of inflation and the challenges they could place on widows and family businesses like farms.

While the United Kingdom’s 40 per cent inheritance tax rate is high, those in Japan face 55 per cent levies. However, in Italy the tax rate is relatively lower at just 4 per cent.

While Hoyle believes an inheritance tax in Australia is inevitable, it’s politically unpalatable.

This year’s election saw the Labor Party hit with misinformation over incorrect claims it had plans to introduce the tax, despite it having no such policy.

Treasurer Josh Frydenberg claimed the Labor Party had plans to introduce the policy.

“Given Labor is already proposing to tax Australians from the cradle to the grave, it is certainly not out of the question that Labor would consider taxing people beyond the grave,” Frydenberg said in January.

A scare campaign on Facebook also went viral, with Labor ultimately writing to the social media platform asking it to take action on the viral content.

According to the Australian Taxation Office website, “There are no inheritance or estate taxes in Australia.” However, the site also states that “There may be some tax obligations for beneficiaries, depending on the nature of any distribution they may receive.”

According to H&R Block, if you reside in Australia and you receive inheritance money from abroad, beneficiaries do not need to pay additional taxes unless specified by the executor. However, if you end up investing any of the income that you receive from the estate, your earnings may end up being taxable.

Even though Australia currently does not have an inheritance tax, there are some specific financial transactions that may still be taxed. Following an individual’s death, his or her estate could keep making an income from things like interest on savings accounts, capital gains from asset sales, or dividends from stocks. In these cases, a trust tax return will be due on any of the income that is taxable, and the tax has to be handled by the beneficiaries or the executor named in the will. A trust tax return must be filed every year until the estate is fully administered, meaning all assets have been distributed to the beneficiaries. If the estate is resolved during the year of death, there are some exemptions from the trust tax return if the income thresholds are low enough.

It is also important to note that inheritance law will vary between territories and states throughout Australia. You should get in touch with your local Public Trustees office to determine the rules that apply to your territory or state.

Individuals who live in Australia and are unclear of their taxation responsibilities can check the Australian Taxation Office’s website. You should also contact a qualified accountant to have all of your questions answered and to ensure you pay any necessary taxes when they are due.

What Can I do to Minimise Taxation on my Inheritance?

There are actions you can take to minimise the impact of having to pay tax on your inheritance.

The first action to take is to seek expert legal advice on the potential taxation that you may be required to pay on your inheritance.

For example, in the case of inheriting the family home, a sale of the property within 2 years can ensure that you are not liable for any Capital Gains Tax. Other actions can be taken to minimise your taxation exposure and an expert Wills and Estates Lawyer will be able to walk you through the options available to you.