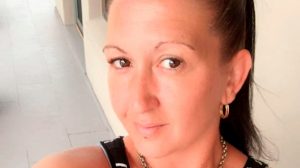 Melissa Dunn, a mother-of-two from Dapto, died on March 11 after a short battle with cervical cancer.

The Facebook profile of a woman who recently died from cancer is among the resources used by a court to determine who should carry out her final wishes.

Melissa Dunn, a mother-of-two from Dapto, south of Wollongong, died on March 11 after a short battle with cervical cancer.

However, she failed to leave a will outlining what she wanted to happen to her body, leading to a dispute between her mother Sharon, and Nikola Dragarski, the father of one of her children, about whether she should be cremated (her mother’s wishes) or buried (her partner’s preference).

Mr Dragarski sought urgent orders in the NSW Supreme Court on Wednesday seeking to have himself named as Ms Dunn’s defacto partner and next of kin.

The court heard the pair’s relationship began in 2003, they started living together in 2010 and their daughter was born the following year.

The couple then separated in March 2016 and, in August that year, Ms Dunn moved into her own house at Dapto.

Despite this, Mr Dragarski still spent time with Ms Dunn, visited her at the Dapto house and they continued having sex. Mr Dragarski told the court he considered they had resumed their relationship, especially when she moved back in with him in March 2018.

However, in a judgment delivered on Thursday, Justice Michael Pembroke ultimately found the relationship had not resumed – despite Mr Dragarski wanting it to – and that he could not legally be considered Ms Dunn’s next of kin.

He pointed to Ms Dunn listing herself as “single” on her Facebook profile, the fact that Mr Dragarski wasn’t on her ‘friends’ list and noted that another status update she wrote on January 9 this year read: “I am still at his house, we still [sic] not together though. Kids are great”.

He also noted Ms Dunn was a member of an online dating website around May 2018, had listed her mother as her emergency contact on her admission to hospital, and was receiving a single parenting payment from Centrelink.

He rejected Ms Dunn’s decision to move in with Mr Dragarski in March 2018 as evidence of their relationship resuming, instead finding that she had done so in order to be closer to her daughter.

Mr Dragarski’s application was dismissed and control of Ms Dunn’s affairs awarded to her mother.