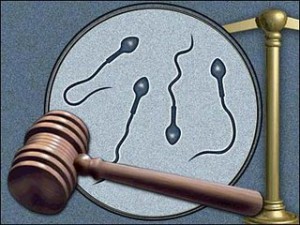 A SPERM donor who secretly fathered two girls in two Australian states four years apart will raise his eldest daughter and have sole rights to decide where she goes to school after winning a bitter custody dispute.

The 47-year-old father’s identity is protected under the Family Law Act, but a recent Federal Magistrates Court judgment has revealed he is involved in “touring” and travels overseas to attend to “business and property dealings”.

The mother of the girl, now seven, was described in the judgments as having “ongoing palpable fury” towards the father after he kept secret from her the fact he had fathered a second daughter.

According to the judgment, she has since branded him a “slimy liar” after he broke the news to her over the phone in front of their daughter who was visiting him while the mother of the half-sister was visiting him with their baby.

Since the discovery, the two women have become friends and the half-sisters now socialise together, with the eldest girl spending part of her school holidays at her half-sister’s house.

Her mother, 41, has since had two more children to two separate fathers. She acknowledged “all the positive elements” the father had brought to their daughter’s life, including “her musical and academic advancement and his generosity”.

But she was accused of “conducting a tirade” against him for most of the four-year legal dispute which started in 2008 when she relocated with their daughter while a restraining order to stop her was pending.

At the time of the move, she had just had a baby with her then partner and gave legal “consent” for the girl to live “primarily” with her father because he had complained of getting a “sore back” from a four-hour drive to see her.

But she challenged the legal agreement in 2010 once he broke the news of the half-sister interstate.

Magistrate Norah Hartnett said: “At the time (the secret half-sister) was 14 months of age. The mother was enraged by the call and her level of ongoing abuse of the father, in particular via email … was heightened. … She continued her denigration of the father to as wide an audience as possible.”

Although they have never been in a relationship, the couple had entered into a “child support agreement” to last 16 years after the birth.