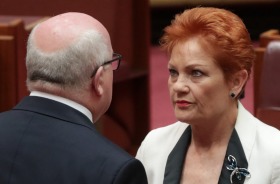 The Turnbull government is expected to shortly commence the biggest review of the Family Law Act since it was introduced in 1976, amid pressure from Pauline Hanson to address the rights of fathers under the Act.

Questioned by Senator Hanson at a Senate committee hearing on Friday, Attorney-General George Brandis indicated the terms of reference for a review by the Australian Law Reform Commission would be released shortly, saying that the government wanted to hold the widest possible review of the workings of the Act.

While Senator Hanson has particularly focused on issues of child support, there are a range of issues facing the Family Court and its governing legislation, and government sources say the Court needs to be reformed before it, or the government, can deal with some of the issues raised by the One Nation senator.

The Court is plagued by long waiting times and staff shortages.

The government originally announced the review in the May budget, saying it would “pave the way for long-term fundamental reform to better meet the needs of modern Australian families” and would report by the end of 2018 “with interim reports to be delivered on key issues”.
However, it is understood the government has since wanted to give priority in the ALRC’s workload to examining Indigenous incarceration rates.

At an additional senate estimates hearing on Friday, Senator Hanson quizzed Senator Brandis about waiting times in family law courts, telling him she was concerned about the lengthy timeline of some cases and the stress that was placing on families.

“Of course it does,” Senator Brandis agreed, conceding her point the courts were overloaded and telling her of his desire to have more judges.

Having some judges on sick leave for up to six months also put a strain on an already stretched system.

“Senator Hanson, you are dead right in identifying this as part of the problem,” Senator Brandis said, noting her interest in the area.

“I thank you for your input into our thinking about these issues.”

Pauline Hanson’s One Nation party went to last year’s federal election with a policy of abolishing the Family Court and replacing it with a tribunal of “mainstream Australians”, though a link to the policy is no longer on its website.

The policy, however, reflects longstanding grievances among some men about child support arrangements and other issues in the court system.

She would force couples into pre-nuptial agreements outlining how they would deal with their children and assets if a relationship broke down.

“Family law is high on my agenda,” she said earlier this year. “I just think it needs a complete overhaul. It needs court-approved premarital agreements on finance and parental issues.

“So before someone goes into a relationship or a marriage, you must have a premarital agreement. It would be confidential (and lodged with courts).

“We’ve got to free up our court system. It’s overloaded. A lot of judgments aren’t being handed down for years.”
Stay Informed. It’s simple, free & convenient!