Tax liabilities may not rank highly in the heat of a divorce but when a couple splits assets – particularly property – there are tax hurdles that many people don’t expect but can still come back to bite.

For parting couples who own investment property, a practical and often easy solution is for one party to move out of the family home into the investment flat. It’s in a familiar location, it saves rent and is often already furnished with the owners’ furniture.

Wrong. Even if such a property turns into a permanent residence, it can never shed the consequence of having been an investment in the past, says Les Stubbs, head of family law at commercial firm Harris Freidmann. 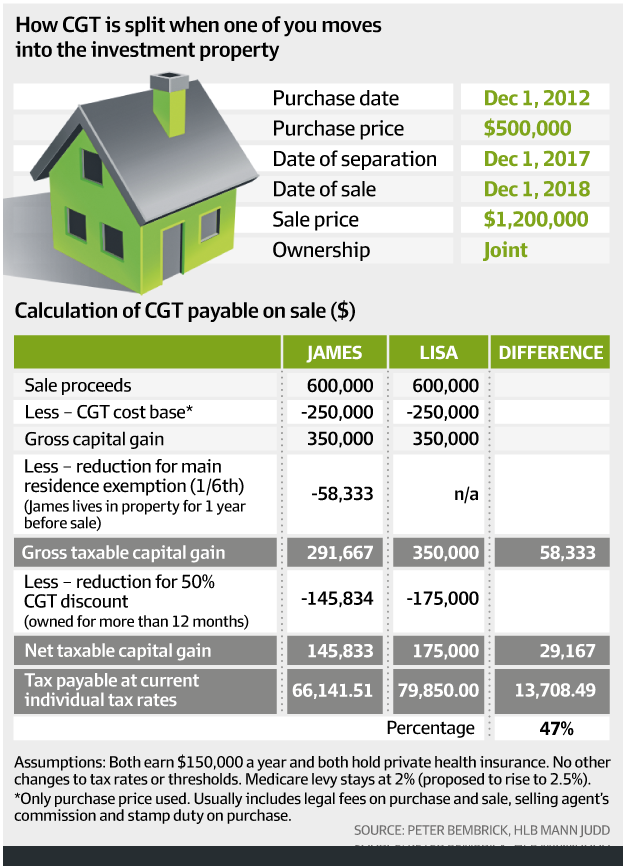 The rules have always been the same, but divorces between older and longer-married couples – the ones likely to have more assets – are growing. Breakups among older couples rose to their highest-ever level in 2016, having nearly doubled over the past 35 years, ABS figures last month showed.

The overall divorce rate slipped to 1.9 per cent of the married population last year, continuing a trend that has seen it fall from 2.9 per cent in 1996. While divorce rates have stabilised in the past 15 years among the 45-to-49 cohort and fallen in the younger age groups – possibly because fewer people are getting married at those ages – divorce has increased among women and men in the older age groups. 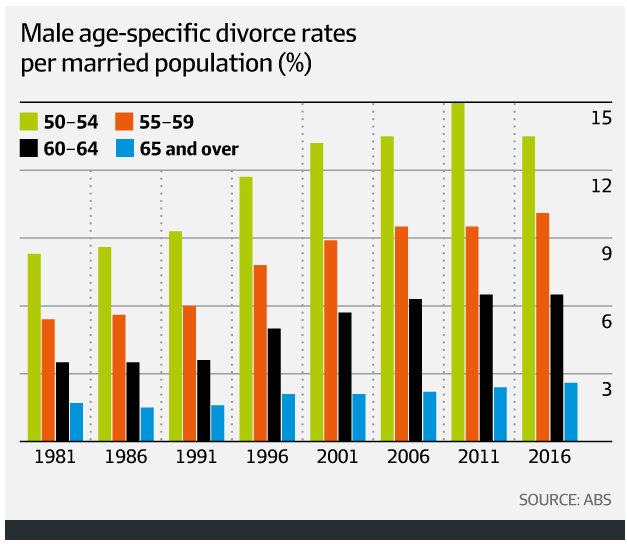 “The median age for divorce continues to rise for both husband and wife,” says Lixia Qu, a demographer with the Australian Institute of Family Studies. “If you look at the durations, the divorces involving marriages of at least 20 years – especially those really longer, like 30 years of marriage – continue to rise.”

The trend of older divorces – when people are generally wealthier – coincides with a growing level of sophistication in investments since the 1980s economic reforms that turbocharged the Australian economy. Law firm Harris Friedman estimates there are around 2 million Australians who own one investment property.

“They’re really more ‘First World’ problems people didn’t have to deal with in the old days,” Stubbs says. “In our parents’ day, people had a house, a car, a joint bank account and probably didn’t have much else. 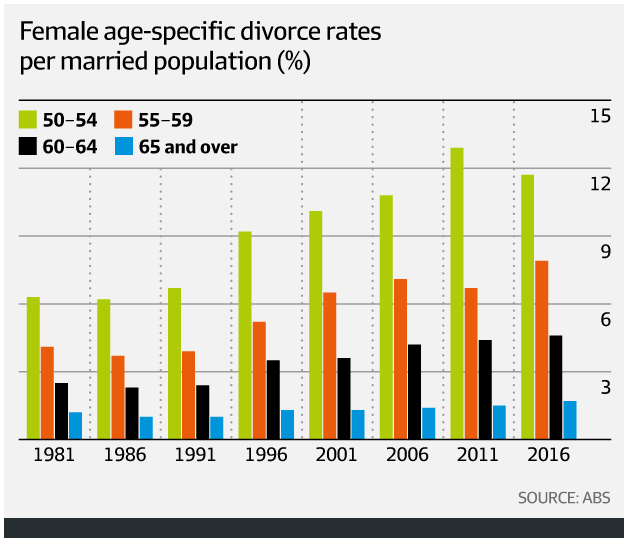 The liabilities between ex-partners can vary greatly. Consider this simplified example of a fictitious couple emerging as two singles from the rubble of a collapsed relationship.

James and Lisa purchased an investment flat in both their names five years before their relationship breakdown for $500,000. When they split, James moved into the unit and lived in it for a year before the former couple sold it for $1.2 million.Accountant

On the surface, each gets $600,000 back from the sale and has a CGT cost base of $250,000 (in this example we have used just the purchase price but usually legal fees on purchase and sale, selling agent’s commission and stamp duty on the purchase would be added to the cost base.). That gives both James and Lisa a gross capital gain of $350,000.

But at this point their tax liabilities part ways.

“If James never moved in and it was just an investment property and they had it as an investment and their separation or divorce went through and they sold it, then the calculation would be simple,” says Peter Bembrick, a tax partner at HLB Mann Judd.

James gets a reduction on his CGT liability that Lisa doesn’t because he lived in the property.

The value of his taxable capital gain is cut by one-sixth as the unit was his permanent residence for one out of the six years it was in their joint ownership. The tax liability on what was an investment property is never extinguished. It simply reduces over time the longer it is lived in.

“You’ll always have that period where it’s been an investment property therefore there will be some element of the gain which is taxed,” Bembrick says.

The gap between the two is reduced, as this calculation happens before – not after – the 50 per cent CGT reduction on investment properties (if held for more than a year) is applied. This means James’s net taxable capital gain is $145,833 while Lisa’s is $175,000 – a difference of $29,167.

“The 50 per cent discount dilutes the benefit of the reduction,” Bembrick says.

This example is necessarily simple. It doesn’t include other deductions or taxes that could apply such as land tax.

But unless these issues are thought through at the time, the implications for separating couples can be far-reaching.

Stubbs tells of one client, previously part of a Victorian couple with children who moved overseas for his work. When they left Australia, the couple rented out the family home and three investment properties they owned.

After some years overseas, the couple separated. The wife returned to Australia with the children and they moved back into the family home. Some time later the husband was transferred back to Australia and he moved into one of the investment properties.

Then the Victorian State Revenue Office levied him for land tax on the house that the wife had moved back into with the children.

“Although he wasn’t living in the home, because they had rented it out while they were away, it stopped being their primary residence and became an investment property,” Stubbs says.

His client argued that it shouldn’t be the case. The revenue office was unmoved, stating that as the house was in his name, he got the land tax bills.

He kept paying the land tax on the house – which cost “some thousands” of dollars – for the next four years while his ex-wife stayed there with their children while they completed high school, Stubbs says.

“He said: ‘You’re living in the house so you should pay it and she said ‘Bugger off’. That happens.”

The house is due to be sold at the end of this year, at which point it will also incur a CGT liability.

Taxes on property for divorcing couples are fraught with difficulty and often the last thing they consider, especially when there are more pressing matters such as children and a roof overhead.

“A lot of people aren’t necessarily planning a year or a month in advance to separate. It can happen quickly,” Stubbs says.

But there is a lot to consider, he says. “If they don’t, those consequences could be hanging around their neck for a long time to come.”