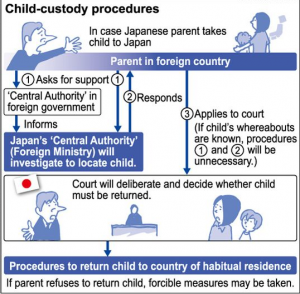 After years of refusing to sign, Japan on Jan. 24 officially joined the Hague convention that governs cross-border child custody disputes that result from broken marriages.

Japan came under heavy pressure from the United States and European countries to become party to The Hague Convention on the Civil Aspects of International Child Abduction. The treaty spells out the guidelines that govern cases in which children of separated or divorced couples are taken to the home country of one parent without the consent of the other.

Nearly 20,000 international marriages a year involving Japanese nationals result in divorce. In certain cases, the Japanese parent returned to Japan with their children without the consent of the other parent.

The convention goes into effect from April 1 in Japan, at which time the Japan’s Foreign Ministry will be obliged to locate children that result from such marriages if requested to do so by a parent overseas. The ministry will then be required to take steps to resolve the dispute through arbitration or other means.

According to the convention, if a marriage fails and the parents start living in separate countries, the decision on who receives parental rights to raise children under 16 falls under the jurisdiction of the country where the family resided with the child before the breakup.

If a parent who takes a child to Japan from overseas does not agree to return the child to the country of former residence, one of two family courts located in either Tokyo or Osaka will decide the matter.

The court has the authority to judge whether to return a child to another country if it believes the child might be subjected to danger or abuse, both mental and physical, if handed over.

Cases involving children taken to Japan before April 1 will be exempt from the convention. A parent overseas can still call on the Japanese government to assist in setting up a meeting with the child in such cases.

The children of Japanese couples will also be subject to the treaty if one parent flees with a child or children overseas.

The Supreme Court has already drawn up detailed guidelines on how to resolve such disputes.

The top court is now working on a manual for family court officers outlining how they should take custody of children in the event a court decides to return them overseas.

The Supreme Court estimates the cases that will go before the two courts will number in the dozens each year, with most disputes expected to be settled out of court.

A senior official with the Supreme Court said only a few of the cases are likely to require the need for officers of the court to physically separate the children from a parent living in Japan.

Judiciary officials said the first case may go before one of the courts as early as July.