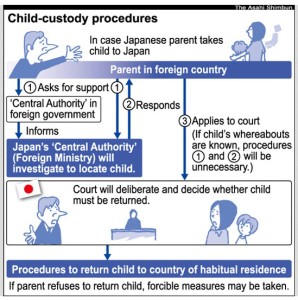 On April 1 2014, Japan ratified the 1980 Hague Convention which should help reduce incidents of international child snatching and help resolve many cross-border custody disputes.

This caused problems in cases of child snatching by separated or divorced couples if one parent took the child to Japan.

Once under the jurisdiction of Japanese law, it was virtually impossible for the other party to regain custody of their child through the legal system of Japan.

And as the Japan Foreign Ministry conceded, the dramatic increase in “people who move across the borders” and “international marriage and international divorce” has meant this has becoming a grown concern for desperate parents.

The convention was first developed by the Hague Conference on Private International Law in 1980.

Amongst its provisions, the most important is its definition for wrongful child removal which states that depriving another party of the ability to exercise their custody rights amounts to wrongful retention of a child.

It further holds that any child taken in this manner must be returned to the country where they usually reside.

For many years now, the United States and large parts of Europe have been demanding that Japan ratified the convention.

Japan finally agreed to do so early last year. As of 2014, there were 92 parties to this convention.

Japan was one of the last major countries to ratify the convention, and until early last year was the only G8 country to not have adopted it.

As a result of ratification, the convention will now become part of Japanese law.

The Japanese government has also taken positive steps to implement and enforce these rules.

In addition to training judges on the convention, the Japanese Foreign Ministry established an authority to locate children who have been taken away and encourage those involved to resolve the custody dispute through mediation where possible.

In addition to resolving many of the current disputes resolving custody of children now in Japan (estimates state that around 120 cases have been filed in Japanese courts), this convention should reduce instances of children being taken abroad unlawfully.

The United States in particular has been very vocal in labelling Japan a “safe haven” for child abductions because of its unwillingness to ratify the law.

Hopefully, the closing of this loophole will prevent many situations from escalating this far in the future.