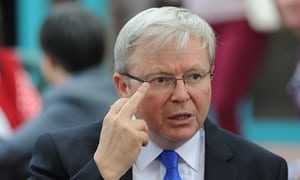 Mr Rudd today acknowledged that the system, which requires a non-custodial parent to make a financial contribution to the other parent for the care of their children, was a matter of “huge controversy”.

“A whole lot of families are going through a whole lot of angst on this,” Mr Rudd told Channel 7’s Sunrise in answer to a question from Emily Turner, of Sydney.

The Government was working on a “whole series” of long-term reform proposals.

It was important to ensure the reforms were “absolutely right” because any changes would affect many families, Mr Rudd said.

“Our anticipation is the changes to the system will be made by year’s end.”