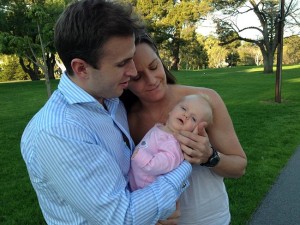 Peter and Alice with baby Grace

Peter Ainsworth may be heir to a $2 billion pokies fortune but he is paying just $125 a week in child support for his infant daughter, Grace, his ex-girlfriend claims.

Mr Ainsworth is the grandson of Aristocrat Gaming founder Len Ainsworth, and son of a multi-millionaire property investor.

Peter Ainsworth however is unemployed, as stipulated in court documents in 2012, and essentially lives off the funds provided to him on an ad-hoc basis by his parents.

According to a story on A Current Affair however, a story that was at times confusing in terms of its agenda,  Alice McClure, the ex-girlfriend and mother of Peter Ainsworth’s infant daughter, lamented that all she wanted was for Peter to visit his daughter more often.

However the vast majority of the story A Current Affair focussed on the Ainsworth family fortune, and implied that Ms McClure should be entitled to significantly more in Child Support than the amount already paid, which is apparently even more than has been determined is owed to her by the Child Support Agency.

Little other financial details were disclosed, but it has since been determined that Mr Ainsworth recently made gratuitous payments to his daughter, including $700 to buy Grace a new cot and $150 for swimming lessons.

What was also neglected in the story was the significant salary that Ms McClure herself earned, and what if any financial support she receives from the government.

It is small details like this that would have made the story on A Current Affair more balanced, as typically these matters involve much more than weekly child support payments. They also involve prior lump-sum payments, purchases or payments for housing, purchase of furniture and other goods, payments for child-specific services including medical, and even gifts or benefits from Mr Ainsworth to Ms McClure that could have put a completely different spin on the story, which as is typical for A Current Affair, was a one-sided affair.

Alice McClure, an executive personal assistant with a very high salary, said in a rare moment of candour that she has been locked in a running battle over child support for their daughter Grace.

“I used to get angry about it but now I think there is nothing I can do,” Ms McClure was quoted as saying.

She denies she was playing the role of a gold digger, claiming they fell in love over their interest in ironman triathlons.

A Senate inquiry is currently looking at ways to improve the Child Support system.