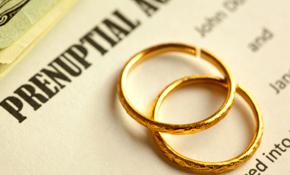 WHILE the likes of Kim Kardashian and Tom Cruise appear to attach a prenuptial agreement with the marriage certificate, the future of financial agreements in Australia is looking uncertain.

An upcoming decision in the Family Court is set to test the controversial legislation on which these prenups are based.

As it stands, the law in this area seems so uncertain that many lawyers will no longer be involved in drafting financial agreements for fear of being sued in the future by disgruntled clients.

There is an increasingly strong view among lawyers that the normal property settlement procedures of the Family Law Act are a fairer and easier means to follow in a divorce.

The issue arose after a case where a bloke fell in love and married a pole dancer soon after splitting from his first wife. The couple entered into a prenup where the new wife would receive $3.25 million if the marriage broke down within four years – he was worth $16 million.

Sadly, the couple split after two years. He claims she lied about being in love with him before the marriage.

In 2004, changes to the Family Law Act required solicitors to certify they had ensured their clients fully understood their financial agreements. This led to litigation where people avoided paying out their prenup, claiming they weren’t given sufficient legal advice.

As you can see, the whole area has become a minefield.

But the point is that more Australians are marrying later.

They have been working longer and have usually built up their own assets such as a home unit or house, car or other investments. The future ownership of these assets, particularly when one partner has more than the other, can be a very sensitive decision.

Marriages should be built on mutual trust, but does this extend to giving away joint ownership of hard-fought investments to spouses who may have blown all their savings on a good time?

That’s why many financially-mismatched couples have followed the US trend of prenups, especially if kids and assets from a previous marriage are rolled into the equation.Each couple is different and the answer depends on what both are comfortable with.

Many family lawyers point out that, given the uncertainty surrounding financial agreements, the normal process of the Family Law Act can be the fairest outcome.

The court will take into account all property initially brought by each party to the relationship and then assess the contribution of each person during the relationship. These may include:

According to the lawyers, protecting the assets you have brought to a relationship starts with good records. Getting assets valued at the time the relationship starts as a base level and clearly valuing any assets from inheritances and windfalls you may receive is important.

Ongoing monetary housekeeping can also keep some sort of financial independence in a relationship.

There may be reasons for each of the partners to continue with separate bank accounts into which their wages are deposited and specific expenses are paid.

A budget should be completed as soon as the marriage starts, particularly if separate bank accounts are to be maintained and each spouse is responsible for their expenses.

It’s also a good test of whether you are both financially compatible.

There is nothing more horrifying than finding you’ve married a compulsive shopper if you’re a spendthrift.

Such incompatibility can ruin a marriage.

How to own a property is also an interesting decision. There are two choices, tenancy in common or joint tenancy.

Tenancy in common assigns each of the spouses direct ownership of a nominated portion of the property. It means each spouse is responsible for their own mortgage and share of the property.

A joint tenancy agreement means that each is jointly and severably responsible for the entire property as well as the mortgage.

Also remember that marriage automatically negates previous wills. It is essential that wills be rewritten after marriage and regularly updated to take into account new offspring and changed circumstances.