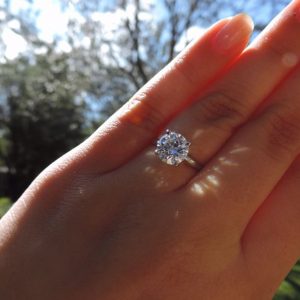 A Canberra man launched legal action against his former fiancee in a bid to recoup the money he’d spent on her engagement ring after their relationship broke down.

The man had first contacted the Melbourne woman and her parents with a view to marriage in late 2014 and they got engaged the following year.

But the pair’s relationship soured, partly due to tensions over where they would live, and ended last October.

The man had asked his former fiancee to give back her engagement ring, as well as gifts from his parents, but he claimed the items were never returned.

He took the case to the ACT Civil and Administrative Tribunal, seeking to recover the cost of the ring and gifts.

Under the Marriage Act, a person can no longer sue for damages linked to social or economic loss arising out of a breach of a promise to marry.

But the law doesn’t apply to gifts given in anticipation of a marriage, meaning a person can try to recover an engagement ring, or its monetary value, if the recipient has broken off the engagement.

Section 111A of the Marriage Act 1961 provides as follows:

111A Abolition of action for breach of promise

The man’s matter went to a hearing to decide whether the tribunal had jurisdiction to handle the case.

His application hinged on whether there had been a breach of the pair’s agreement to marry, and whether that breach had taken place in the ACT. This would bring into play section 22 of the ACT Civil and Administrative Tribunal Act 2009 (ACAT Act).

If the man’s bid failed, any further attempts to recover the gifts would need to be pursued under Victorian law, ACAT senior member Graeme Lunney said in his decision.

Mr Lunney noted there had been dispute about who had ended the relationship, saying the engagement failed after “unhappy differences arose over which there is great controversy”.

He said the phone conversation the pair had last October, when they had broken up, “was one between two people in a decaying relationship unable to find a way forward any further”.

He found there had not been a “unilateral withdrawal by one party in breach of a prior promise”, rather a recognition by two people that their relationship had reached a tipping point and was over.

“Consequently, in my view there was no ‘breach’ that occurred in the ACT which would give this tribunal jurisdiction in the proceedings brought by the applicant,” Mr Lunney said.

“It was mutual recognition of an unhappy state of affairs that was beyond repair. In those circumstances the tribunal lacks jurisdiction to adjudicate the dispute.”

Mr Lunney dismissed the man’s application. The parties were ordered to bear their own legal costs.