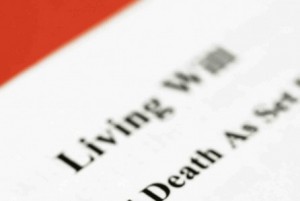 Some leading doctors and ethicists are calling for uniform national laws to guarantee a dying person’s wishes, as expressed in a living will, are respected by doctors and hospitals.

TONY JONES, PRESENTER: Some leading doctors and ethicists are calling for uniform national laws to guarantee a dying person’s right to what they call “a good death”. They say new medical technology is sometimes prolonging life unnecessarily and causing distress to dying people’s families, even when the families want treatment withdrawn. They’re also calling for reforms to ensure that living wills or so-called “advance care directives” are respected by doctors and hospitals.

Well shortly we’ll talk to a senior intensive care specialist and ethicist about how legal uncertainties are affecting doctors, patients and their families. First this special report from Suzie Smith.

SUZANNE SMITH, REPORTER: Across Australia in any one year, doctors and hospitals face more than 40,000 requests for treatment to be withdrawn. And now an issue regarding a pacemaker has revealed the complexity of the issue.

Pacemakers like this one are implanted in your body, but controlled externally by a doctor, who receives information via a radio signal hooked up to a computer.

But what happens when a person who needs this pacemaker for every heartbeat is dying from another ailment? What if that person is unconscious? In the last 48 hours of life? Can that person’s family be assured that it can be turned off in a timely fashion so the distress ends?

This is exactly what happened in Newcastle, north of Sydney.

JAMES LEITCH, SENIOR CARDIOLOGIST: And this patient had a stroke and became unconscious and was expected to die within three to five days. And during the period when the patient unconscious, the relatives were very distressed by this and they felt that the patient was distressed as well, and they requested that the patients pacemaker be turned off, and that would normally result in the patient dying virtually instantaneously. The doctors requested the technician to come and deactivate the pacemaker, but the technician felt it was unethical to do so. And subsequently after a lot of discussion with the relatives and doctor’s attendants, the doctor de-activated the pacemaker and the patient died.

SUZANNE SMITH: Senior cardiologist Dr James Leitch says there are not clear guidelines about deactivating pacemakers where patients are dependent on the device.

SUZANNE SMITH: And in NSW there is legal uncertainty about whether families have the right to ask for the pacemaker or any other life-saving medical equipment to be turned off when death is imminent.

Dr Peter Saul is a senior intensive care specialist and ethics consultant for the Newcastle district.

PETER SAUL, SENIOR ICU SPECIALIST AND ETHICS CONSULTANT: The legislation in all the neighbouring states allows for a best interests judgement to be made by the family, but not in NSW where it doesn’t appear as part of our legislation.

SUZANNE SMITH: And is that creating confusion for doctors and hospitals, do you think?

PETER SAUL: Yes, in fact when we tried to write guidelines about end-of-life care in NSW, they were held up for a year and a half while lawyers tried to work out what the law did say in this state. And I don’t think at this point there is any agreement in the various legal academics or the legal branch in NSW Health about what the law really says.

SUZANNE SMITH: Dr Saul says the existing law, written in 1987, has not kept up with advances in medical technology.

PETER SAUL: Now we’re implanting more and more of these devices that you’ve heard about; not just defibrillators and pacemakers, but assist devices for hearts and stuff like that, and now those people are ageing and starting to reach a point where they’re going to die, and the law or ethics or guidelines about how these things are now to be turned off, if that’s what we decide to do, are very unclear, especially when the patient themselves can’t make that demand and you’re asking for somebody else to demand it on their behalf.

SUZANNE SMITH: There is also confusion that even if someone has an advanced care directive or a so-called living will and it that stipulates that the family can turn off the pacemaker, that that document may not be legally binding in NSW.

JOHN KAYE, NSW GREENS MLC: In NSW, every time somebody writes an advanced care directive or ends up in hospital, they have to second guess what the courts would do. Rather than having a piece of black letter law written down in the legislation what their rights are and how this should operate, they have to second guess what the Supreme Court will do next.

JOHN KAYE: In that massive moral panic that surrounds anything to do with end-of-life, the religious right in NSW has created a massive confusion between the right to prescribe what kind of treatment you want once you’ve lost the capacity to do so and the issues of euthanasia. We want the O’Farrell Government to overcome the sectional interests and recognise that the vast majority of people in NSW would at least want a Law Reform Commission examination of the issue of: how do we protect advance care directives?

GREG SMITH, NSW ATTORNEY-GENERAL (male voiceover): “There is no need for further legislation in relation to these issues. … This is a dynamic area and therefore best dealt with by the common law.”

SUZANNE SMITH: But in Tasmania they are forging ahead with an innovative state plan for advanced care directives.

The debate about living wills or advanced directives has been going on here in Tasmania for some time. An experiment is underway called the Living Well and Dying Well Project where people have much more say in how they want to die.

97-year-old Margaret Astell has written a living will which is registered at her nursing home and all her doctors know about it.

MARGARET ASTELL, NURSING HOME RESIDENT: It’s much easier for a family to know what you would like and what you want and for you to go and they’ve got no idea and then they can’t be disagreements over it because it’s what mum wanted and there it is, it’s in black and white that this is what she wants so this is what she has.

SUZANNE SMITH: It is part of the new e-health system being developed across Northern Tasmania. It’s an electronic record of what people want at the end of their lives. The system aims to prevent unwanted medical intervention and 400 people in nursing homes are taking part across north-western Tasmania.

MARGARET ASTELL: I just want everything to be nice and nobody to be really upset about it because I’ve had a very good innings.

SUZANNE SMITH: The Australian Council of Health Ministers is looking at turning the Tasmanian model into a national blueprint.

JAMES LEITCH: Well I think it’s a very important discussion to have with the patients when you implant the device, to talk to them about how this device is going to function at end-of-life and their wishes under those circumstances. So certainly these decisions are far easier if we have a clear directive from the patient.

TONY JONES: Well the NSW Attorney-General Greg Smith declined Lateline’s offer of an interview, but his full written statement will be on our website shortly.