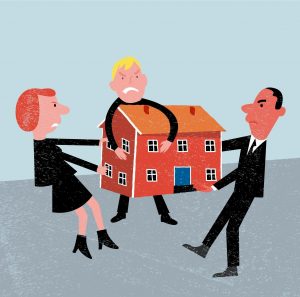 How would you feel if your estate went to a complete stranger, someone you’d never even met? It’s more likely than you might expect.

Jack* and Jill* were married in 1981 and had two children. They were happily married for 32 years. In that time they both worked and saved and, with help of some late-career compulsory superannuation, built up a tidy nest egg.

The assets Mary inherited from Jack included wealth that Jill had worked so hard for, believing that her kids would ultimately benefit.

In their wills Jack and Jill left their respective estates to each other. They agreed the survivor would look after the children. Jill died from breast cancer at 68. Jack was heartbroken, alone for the first time in decades.

Try as he might to fill his life with hobbies, kids, grandchildren and friends, Jack was lonely. He missed the closeness of a trusted, intimate partner; the companionship for those times when family and friends weren’t around. That’s when, at the age of 71, he met Mary*, 15 years his junior.

For Jack nothing could replace the wonderful years he had spent with Jill. But his life with Mary alleviated that awful loneliness. They had been dating for about six months when Jack invited Mary to live with him. They became a de facto couple.

After a while Mary began to feel that, as she was likely to outlive him, it would be only fair for him to make provisions for her in his will. She understood that Jack wanted his kids to have most of his estate but surely she should get something.

As time passed, Jack became more reliant on Mary and very thankful for her care. He started to feel that leaving her a large portion of his estate was important. Then after Mary confirmed to him that she’d look after his children, Jack agreed to give everything in his estate to her. Her solicitor prepared Jack’s new will.

When Jack died, Mary was his sole beneficiary. In her view Jack’s children, who’d never been very close to her, were doing well and didn’t really need any of Jack’s estate. Mary felt that she and her only child were much more in need, so she managed Jack’s estate for her benefit alone.

The money and assets that Mary inherited from Jack included all the wealth that Jill had worked so hard for, believing that her kids would ultimately benefit. Jill’s estate had passed to a complete stranger.

Is this case unusual? No, it is in fact quite common.

There are a number of different estate planning strategies to avoid this – but first couples have to acknowledge that Jack and Jill’s story could happen to them. Couples need to have the conversation acknowledging that when one of them dies, things change forever.

That change is not a reflection on the past. It does not alter in any way the importance of their relationship – the love and devotion given and received during decades of married life. It simply reflects a new situation, one that neither of them has ever been in and that is therefore unknown.

Often couples are unwilling to focus on the issue. They may not understand the potential for the problem to occur. One or both may think that raising the issue would be a sign of distrust in their spouse, an indication their marriage was not strong, that they were trying to exert power over their spouse or “rule from the grave” or a view that fixing the problem would be too complicated or costly.

As understandable as these thoughts are, they are not a good reason to put the children’s inheritance at risk. They can be partially overcome by a confidential chat with the family solicitor who could recommend the relevant solution to both members of the couple without needing to reveal the concern was initiated by one of them.

To protect her estate for her children, and as a half-owner in the family home, Jill could have given Jack the right to live in their family home until his death or remarriage after which the home would be sold and the proceeds from Jill’s half share given to the children.

She could also have arranged for Jack to receive only the income from Jill’s share of the couple’s assets and ensure the capital would go to the kids once Jack passed. She could appoint Jack and her two children as joint executors so that her wishes were met.

Protecting your children’s inheritance is about good planning – and that can only happen through pragmatic awareness and recognition of what is possible.

*Names have been changed to protect the privacy of the individuals.