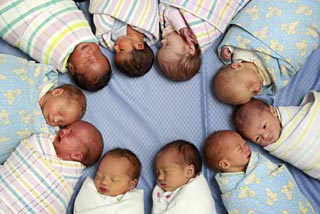 THE revelation that federal Labor senator Jacinta Collins gave up her baby when she was 19 provided an insight into how adoption can be a positive fruit of an unplanned pregnancy.

That Jacinta’s 30-year-old son was able to attend her swearing-in as the Minister for Mental Health and Ageing last month, as outlined in the Weekend Australian, was particularly touching.

Nonetheless, the sad fact remains that in Australia today, our adoption laws have become among the worst in the developed world.

For Australian families wanting to adopt a child the road is incredibly long. In 2011-12 there were only 333 adoptions in Australia: 149 of these were overseas adoptions, 129 were “known’ adoptions (when the adoption formalises a pre-existing parental relationship) and only 55 were local adoptions. This number has fallen from 1494 in 1987, so there has been a 78 per cent drop in the numbers of adoptions in Australia over the past 25 years.

Even though adoption rates are at an all-time low, there are significant numbers of Australian families wishing to adopt.

The current waiting list for inter-country adoption can be anything between three to five years and costs may be as high as $30,000.

For local adoption, waiting times can be just as long and riddled with red tape.

Australia now has the second-lowest adoption rate in the developed world and, with an average five-year period for adoption approval, the waiting times are now the longest they have been in Australian history.

Making matters worse, last month 27 Australian families were heartbroken when they discovered their quest to adopt an Ethiopian child had been abruptly ended by the Federal Government’s decision to close the inter-country adoption program to Ethiopia.

But you won’t hear about Australia’s appallingly inefficient adoption laws from our politicians as they rush to outdo each other on policies to improve access to childcare and paid parental leave for middle-class Australia.

It may not be a hot election issue but Australia is in desperate need of adoption law reform.

With infertility affecting one in six Australian women, and with IVF often a difficult, exhausting and ultimately unsuccessful process, a more streamlined and effective adoption process would provide an alternative for families desperate to raise children.

ANOTHER consequence of our adoption laws is that adoption is not currently a viable alternative to abortion.

Because the adoption process is so complex and time-consuming, a pregnant woman wishing to have the baby but unwilling to raise that child is often propelled to have an abortion. This compares with other countries where a woman wanting to adopt out her baby can easily do so.

That is why I am proud to be on the research committee of Women’s Forum Australia, which this month is launching its campaign to increase access to adoption in Australia.

It’s clear that further research is needed to identify the barriers towards adoption in Australia.

Women’s Forum Australia is beginning this work by conducting a research project and education campaign looking into this – the vital first step in lobbying for adoption law reform.

We can have an Australia where the adoption process is more efficient and readily available – we just need enough of us to care.

Dr Joanna Howe is a lecturer in law at the University of Adelaide, a former NSW Rhodes Scholar and on the research committee of Women’s Forum Australia.