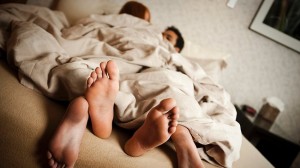 HAVING regular sex with a housemate does not mean you’re in a “relationship” – even if the arrangement lasts more than a decade, a judge has ruled.

Family Court Judge Jane Crisford entered into the “friends with benefits” debate when she ruled that a man and woman who had regular sex as friends over a 14-year period were not in a de facto relationship.

Judge Crisford said it did not matter that the pair had been living in the same house, socialised on occasions and initially took short holidays together because they essentially lived separate lives.

“He continued to associate with her as it was a convenient and uncomplicated arrangement,” she said.

“On one level they were companions and could co-exist amicably – in common parlance, they were friends with benefits.

“(He) was simply biding his time. For a reduced rent he had some domestic tasks performed for him. He had a companion when it suited him and he had sex when the need arose.”

The court was asked to define the relationship as part of a property dispute between the housemates, who cannot be identified and are referred to as “Mikhail Markhov and Kanya Shelley” by the judge.

In total, Dr Markhov had 10 properties while Ms Shelley owned five. This included a property they bought together in 2006.

The application was lodged in the Family Court a few months before Dr Markhov married another woman in 2009.

Ms Shelley, a registered nurse, moved into Dr Markhov’s unit as his tenant in 1995, a few years after they met.

A few months later she then bought her own unit in the same complex and Dr Markhov, a scientist, then moved into that unit with her as a tenant while his home was being renovated.

Over the years the pair bought other properties and resided in them together as landlord and tenant. Ms Shelley claimed over that time the pair were in a “committed and marriage-like” relationship and slept together “every night”.

Dr Markhov at first claimed the relationship was platonic, but later admitted having sex with Ms Shelley in most of the houses, justifying his actions by saying he had “needs”.

In handing down her decision, Judge Crisford said while she found some of Dr Markhov’s attitudes “dishonourable”, she was not satisfied there was a marriage-like relationship. He never intended to have a long-term relationship with her, she said.

Judge Crisford said Ms Shelley benefited from the arrangement in much the same way and disputed her claims of an exclusive, marriage-like relationship.