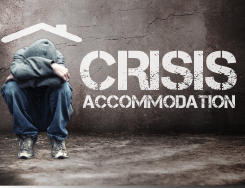 Some domestic violence perpetrators will be removed from their family homes under a new scheme by a state government, but experts warn it could leave the victims struggling financially.

The South Australian government last month announced a small trial under which perpetrators will be removed and placed in crisis accommodation, giving victims the option to stay at home.

It is part of a $4 million initiative which will see 40 new crisis accommodation beds rolled out in the state – a small number of which will be for perpetrators.

SA human services minister Michelle Lensink said in announcing the pilot that it would result in less disruption to victims’ lives at an already very traumatic time.

Experts have welcomed the trial but have concerns; not just about the safety risk of a perpetrator returning to the home, but also the victim’s ability to keep the roof over their head.

It is a good idea in theory, says Shelter SA executive director Alice Clark, because it provides stability and continued access to support networks.

But dropping from a dual-income household to one meant victims may be unable to meet rent or mortgage repayments and would need additional financial support.

“It’s like a drop in the bucket,” said Dr Clark. “We see thousands of women going back to violent situations and partners because of [poor] housing affordability.”

She added an increase in public and community housing was crucial to support victims. It was a sentiment echoed by housing consultant Sue Cripps.

“If a woman is left behind in a house with a massive mortgage or rent she’s going to end up homeless herself because she can’t afford it,” Ms Cripps said.

However Ms Cripps sees merit in the approach as long it comes with support services for both victims and perpetrators,

“How many years have we been creating safety for women at refuges and one woman a week is still getting murdered,” Ms Cripps said. “It actually makes you think it’s time for something different, but it has to be in addition, it can’t diminish what is available.”

While many may question providing accommodation for perpetrators, and prefer it if they were just kicked out, Ms Cripps said that would not solve the problem or keep victims safe.

“Just putting them out on the street does nothing to reduce anger and violence,” Ms Cripps said. “You cannot expect people to do the deep therapeutic work if they don’t know where they’re sleeping at night.”

Dr Sarah Wendt, professor of social work at Flinders University, said to seriously tackle domestic violence attention needed to turn to perpetrators, but it could not be at the expense of victims.

“If you think about the resources and intensity of moving women and children around versus one man there is some economic argument for it,” she added.

Dr Sarah Wendt believed that with the right support services a victim could address the housing affordability issue, but warned few perpetrators would move out of their own accord. She added the composition of such crisis accommodation would be crucial in helping perpetrators recover, but they would need more than a few weeks of support.

She said there are a very small number of similar programs in Australia, including Communicare Breathing Space in Western Australia and Room 4 Change in the ACT. There’s also Fixed Address, a new program on the mid-north coast of NSW, which will assist with support services and transitional housing for perpetrators at eight properties.

While no one has been housed yet under the Fixed Address program, Kempsey Families executive officer June Will said requests have come from victims, family members, correction services and the perpetrators themselves. While there has been some community backlash to the housing of perpetrators, Ms Will said that without alternative accommodation, they would simply try to go home.

Dr Sarah Wendt warned the sector not to underestimate the potential or risk of this “brave” trial, and said initiatives should be thoroughly evaluated before they were scaled up.