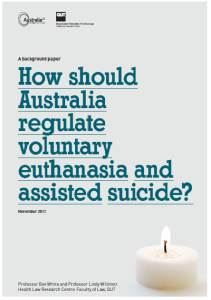 The Tasmanian Greens leader Nick McKim has welcomed a report that describes Australia’s euthanasia laws as broken and incoherent.

But Mr McKim will not set a date for the legislation’s introduction to parliament.

“We had a strong level of interest in the discussion paper that Lara Giddings and I put out,” Mr McKim said.

“And we’re working through some of the issues that have been raised as a result of that consultation.”

“And we have certainly both committed to tabling a bill and bringing it on for debate later this year in the House of Assembly,” he said.