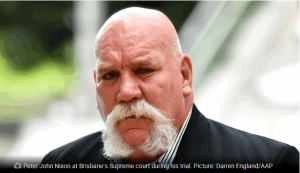 A Brisbane builder accused of helping his frail and elderly dad to kill himself has been acquitted by a jury.

Peter John Nixon, 59, from Petrie, stood trial for the past four days accused of assisting his retired firefighter father John Stephen Nixon, 88 to commit suicide in April 2015, telling him “Dad this will just help you go to sleep”.

The jury deliberated for one hour and 40 minutes and returned their verdict in the Supreme Court of Queensland in Brisbane just after 2.50pm today.

Prosecutor Danny Boyle alleged that Nixon Jnr dissolved the pain relief drug oxycodone and sedative diazepam into a bottle of soft drink in 2013 and kept it in the fridge, then gave the cocktail for his father to drink two years later.

Mr Boyle told the jury in his closing address on Monday that Nixon had lied to doctors after his father was admitted to hospital after drinking the cocktail on April 27.

Mr Boyle said Nixon Jnr told doctors he believed his father had consumed a tablet related to valium, and for three days didn’t disclose that he had also consumed oxycodone.

The forensic pathologist who carried the autopsy on Nixon Snr last week told the jury that he had “no doubt” that pain medication oxycodone “played a role” in inducing John Stephen Nixon’s “mixed drug toxicity”, which was the underlying cause of his death on May 9, 2015.

But Nixon Jnr’s defence barrister Dean Wells told the jury there was no way of proving beyond reasonable doubt the prosecution claim that oxycodone was to blame for Nixon Snr’s death.

He said the prosecutors “causal chain has a missing” link because they could not prove that Nixon Jnr’s actions in giving his father the soft drink laced with pills was a trigger for the mixed drug toxicity.

He said Nixon Snr died from aspiration pneumonia and not from a drug overdose, so Nixon jnr cant be to blame.

“Two doctors say he may have had the aspiration pneumonia before he went to hospital,” Mr Wells told the jury.

In his closing address Mr Boyle said Nixon Jnr had not “planned” to help his father kill himself that day, but he had a mental “shift” when seeing his father sitting in a taxi.

“Obviously it’s a sad case and you may have feelings of sympathy for him,” Mr Boyle said. “But his desire to give his father a dignified death is not a defence.”

Mr Wells told the jury in his closing address that his client must be acquitted because he never intended to help his father kill himself, he was only trying to get his father to sleep so he could have a valid reason to take him to Prince Charles Hospital in Chermside without upsetting nursing home staff.

Mr Wells said statements Nixon Jnr made to the police on May 1, 2015, which prosecutors allege were confessions, were not because Nixon Jnr didn’t understand the law and mistakenly believed he was guilty during a police interview which was “sprung on him” by surprise.

“It is what he has actually done that counts,” Mr Wells told the jury.

“You have to decide whether he has done it with the necessary intent,” he said.

“If there is going to be a life hereafter in that life John will embrace Peter as a most loyal and devoted son,” Mr Wells said.

“But … if the only life Peter is going to get is this one, and if the only justice he is going to receive is yours, then I suggest there is abundant evidence on which you can set him free, so he can go home to the loving arms of his family and let John Nixon rest in peace.”