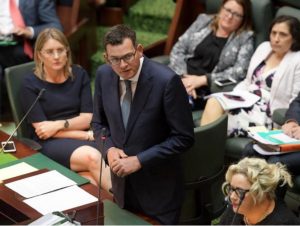 The Bill, which would allow terminally ill Victorians to apply for lethal medication in the last year of their lives, now appears set to pass the Legislative Assembly late today or on Friday.

There is likely to be a debate on amendments to the substance of the bill today, including whether to reduce the time frame in which patients could access deadly drugs from a year to six months.

The bill would then need to pass the Legislative Council next month to become law.

Late last night, Mr Merlino — a vocal euthanasia opponent — moved to put the bill on hold indefinitely because of concerns about patient safeguards and other issues.

But his reasoned amendment was defeated 47 votes to 39.

Several Labor MPs voted in favour of the amendment with most coalition MPs, while 5 Liberal MPs, two Greens and two independents voted with most of Labor’s MPs against it.

Advocates and opponents of the scheme filled the public gallery at 11:30pm last night as the results of the crucial vote were declared.

Late yesterday Premier Daniel Andrews caved in to Mr Merlino’s push for an ALP conscience vote on his amendment, despite previously arguing it should be a procedural matter.

Health Minister Jill Hennessy said last night there had been sincerity in the comprehensive debate so far, and that politicians have expressed “vulnerability” in making their choice.

“These debates can bring out the best in politicians,” she said.

Earlier in the day Police Minister Lisa Neville opened up about her ­terminally ill mother’s last days being unable to eat or hold her head up, as emotional MPs continued to debate ­euthanasia laws.

Several have revealed painful experiences, including Nationals MP Danny O’Brien who spoke on the death of his twin baby boys in 2008.

But the personal outpourings were punctured by Australian Medical Association president Michael Gannon taking aim at creating a voluntary assisted-death scheme because a “few powerful people see (a) parent die”.

Ms Neville said it was ­“almost impossible” to ignore personal experiences, as she described her mother’s breast cancer ordeal that had left her unable to “speak, eat, drink, swallow, hold her head up” ­before she died.

On Tuesday, Premier Daniel Andrews had choked back tears as he spoke about his ­father’s last days in palliative care before dying of cancer.

Mr Gannon stood by his tweet yesterday, but the AMA’s Victorian branch said it “apologises to the Premier of Victoria, Victoria’s Minister for Health, AMA members and others who have lost a parent”.