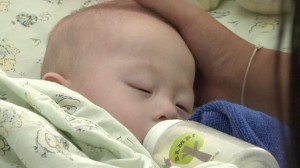 The recent baby Gammy case has exposed the pitfalls of the international commercial surrogacy trade.

Gammy, a baby with Down syndrome, was left with his Thai surrogate mother while his healthy twin sister returned to Western Australia to live with her biological father and his wife.

Since then, two Australian couples have been temporarily stopped from leaving Thailand with their surrogate children. Thai authorities are considering draft legislation that may shut down the commercial surrogacy trade.

A Family Law Council report, recently released by Attorney-General George Brandis, says “a significant and apparently growing number of children are being born as a result of commercial surrogacy arrangements outside Australia (more than several hundred each year)”.

The spate of cases raises questions about the legal rights a child born to an overseas surrogate has in Australia, and what rights Australians who engage in surrogacy agreements have in Thailand and other countries.

Thai surrogate mums ‘not compelled to give up the child’

Thai parentage law does not mention surrogacy. In Thailand, a birth mother is considered the legal mother of the child. If a Thai surrogate mother is married, her husband becomes the legal father.

The Australian embassy in Bangkok says Thailand currently has no laws or published court decisions directly relating to the practice of surrogacy.

Dr Sonia Allan from Macquarie University says the surrogate mother “is not compelled to give up the child to the commissioning or biological parents”.

“Arguably, a child born in Thailand acquires Thai citizenship, due to the legal status of the mother,” she says. Gammy’s Thai birth mother has not given up her parental rights, and Professor Allan says citizenship is determined by the legal parents, not by the biological parents.

Putting a commissioning, and often biological, father’s name on the Thai birth certificate does not give rise to legal paternity, and does not give him an automatic right to custody, she says.

In the case of baby Gammy, Professor Jenni Millbank from the University of Technology Sydney told Fact Check: “There is no legislation in either country to compel her to relinquish – she is a legal parent in both jurisdictions.”

The Australian Department of Foreign Affairs and Trade says: “Current advice is that Thai authorities are enforcing documentation requirements upon exit of the country when they suspect a child has been born by surrogacy in Thailand.” It says required documents may include:

The Thai law that confers parental rights on the surrogate is not mirrored in India, where the surrogate mother is not viewed as the legal parent.

The inconsistency in the laws raises the vexed issue of who is ultimately legally responsible for a baby born to a surrogate across international jurisdictions.

Professor Millbank says: “In the absence of Australian parentage the child would, in some circumstances (such as birth in India), be both stateless and parentless; in others the child would have the citizenship of the birth country (United States, Thailand) but no parents (California, British Columbia); or only a mother there (Thailand).”

Dr Allan told Fact Check: “There is good reason to see the birth mother as the legal mother in the first instance”, arguing it is “a way of protecting the woman carrying the child if she does not want to relinquish it.”

When a baby is born to a surrogate mother in Thailand or India, euphoria may be quickly overcome by the legal minefield that must be navigated to get the baby Australian citizenship, a passport, and eventually to achieve thelegal status having an Australian parent.

It is the same process any Australian parent needs to undertake when a child is born overseas.

In addition to the general documents required for Australian citizenship, the Australian embassy in Thailand says when a child is born as a result of a surrogacy arrangement there needs to be a certified copy of the agreement and evidence that the child is the biological child of the “commissioning” parent. The embassy says the commissioning parent and child “need” to undergo DNA testing.

The application is determined in accordance with the Australian Citizenship Act (2007) and citizenship is ultimately conferred by the Department of Immigration and Citizenship.

Professor Millbank says parents commonly misunderstand that the granting of citizenship – which applies only for that sole legislative purpose – is a grant of parental status under Australian state and federal law.

Would baby Gammy be eligible for Australian citizenship? “Technically it appears the answer would be no – citizenship by descent is determined by the citizenship of the legal parents (and not necessarily genetics),” Dr Allan says.

“I think that granting baby Gammy Australian citizenship would require making a special exception in this case.”

The Minister for Immigration has the ultimate power to confer citizenship.

Applying for an Australian passport

“The written consent of all persons with parental responsibility for a child’s passport must be obtained for each new passport application until the child turns 18 years old,” the department says.

There was commentary suggesting the Israeli government was concerned about potential child trafficking or kidnapping.

Overseas commercial surrogacy on the rise despite state bans

According to a 2011 Family Court judgment, state laws “have aimed to protect women and children from what the legislature has seen as abusive practices which potentially surround the commercialisation of surrogacy”.

Although some states have banned overseas surrogacy agreements, the Family Law Council report notes “the number of children conceived as a result of overseas commercial surrogacy arrangements has increased dramatically in the past several years, despite the existence of laws prohibiting such arrangements, and that, to its knowledge, none of the intended parents in these cases has been prosecuted”.

Nonetheless, the bans on overseas surrogacy agreements in some states raise a number of questions for a couple returning with a surrogate child from Thailand or India.

While the federal Immigration Department may grant the child citizenship, the department warns commissioning parents that overseas surrogacy arrangements may not fulfil the requirements for a transfer of legal parentage under state law.

The department says this “may be because the arrangement entered into is commercial in nature and/or the parties may not have received counselling or independent legal advice”.

The Family Law Council report says “a birth certificate that is issued in an international jurisdiction, or a parentage declaration made by a foreign court, is not binding on an Australian court”.

It warns that adoption of the children born from overseas surrogacy arrangements can also be difficult, and adoption – which is also governed by state law – is highly regulated.

It says “it would seem that a large number of young children are growing up in Australia without any secure legal relationship to the parents who are raising them”.

“Council notes the importance of protecting the child’s right to know of their birth parentage, the concerns expressed about the potential for exploitation of surrogates, and the need to ensure that children enjoy ‘the same status, protection and support irrespective of the circumstances of the child’s birth’,” it says.

The report recommends the introduction of a federal Status of Children Act, which would make orders about the status of children and legal parentage.

Dr Allan says: “The Australian approach to legal parentage is particularly complex in the context of trans-national surrogacy arrangements. Australian law does not recognise parental status granted in other jurisdictions unless specifically prescribed under legislation for particular purposes.”

There have been a number of cases in the federal Family Court in recent years which have involved surrogacy arrangements where applications for ‘parentage’ have failed to meet the requirements of state or territory law.

One case raised in the Family Law Council report involved a Queensland couple, Mr and Ms Dudley, and a Thai surrogate mother, Ms Chedi. In 2011, the Family Court heard an application by the intending father, who was the biological parent of twin children born to Ms Chedi. “The parents were not able to obtain a transfer of parentage order from the relevant state court as the commercial surrogacy arrangement used by the parties was not permitted by Queensland law,” the report says.

However, given the children’s need for a legal relationship of some kind with the intended parents, Justice Garry Watts made parenting orders giving the applicants parental responsibility for the children during their minority.

It should be noted that Justice Watts declined to make a finding that Mr Dudley in that case was a parent.

Dr Allan says: “When people have broken state laws, the Family Court may still have had to determine legal parentage of children born as a result. This may arguably be seen as a ‘conflict’ as it places the Family Court judges in a difficult position.”

The judgment noted that not having full parenting rights may have an impact in areas such as:

While it is not illegal for people from Western Australia to engage in commercial surrogacy overseas, baby Gammy’s parents, David and Wendy Farnell, said in an interview with 60 Minutes on August 8 that they are still not recognised as the parents of baby Gammy’s twin sister, Pipah, who is living with them in Bunbury, WA.

Mr Farnell told the program: “Everybody is saying we don’t recognise her, because she is not born in Australia, and she is not not under our name. So we are desperately trying to get her our name and be recognised as the parents.”