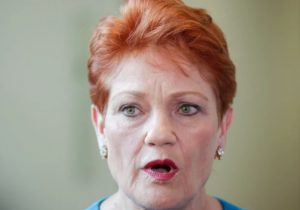 One Nation leader Pauline Hanson has accused women of making up domestic violence claims in order to get custody of their children, as she defended a new parliamentary inquiry into the family law system.

Domestic violence campaigner Rosie Batty meanwhile has called on Labor and the Greens to block the inquiry –  of which Senator Hanson is set to be deputy chair – saying it is “completely unacceptable” for “politicians with their own agendas” to lead parliamentary investigations.

In an interview on ABC’s Radio National on Wednesday, Senator Hanson said she was hearing “too many cases” where “parents are using domestic violence to stop the other parent from seeing their children”.  Asked if she was saying mothers were going into the Family Court and making up accusations of family violence, the One Nation leader replied, “I am”.

Senator Hanson was pressed several times by host Hamish Macdonald to provide evidence for her claim.

The One Nation leader said people phoned her office with similar stories “on a weekly, if not daily basis sometimes”.

While she did not point to any research about the problem, she said: “Why do you think we’ve got three men suiciding a day and we’ve got one woman being murdered a week?

“Don’t you believe that this needs to be addressed?”

She added: “I’m sick of hearing about this gender bias. You get rid of the gender and you treat everyone equally.”

According to anti-violence group, Our Watch, violence against women is a serious and widespread problem in Australia. On average, one woman a week is murdered by her current or former partner.

Prime Minister Scott Morrison announced a parliamentary review into the family law system on Tuesday. The inquiry will be chaired by former social services minister, Kevin Andrews. It follows years of pressure from Senator Hanson to overhaul the system.

The inquiry will examine concerns including the onus of proof required to gain an apprehended violence order, the cost of the court process and claims of false evidence being used against former partners.

Mr Morrison told Channel Seven on Wednesday that relationship breakdown had a “devastating impact” on parents, children and grandparents. He said the Family Court and child support processes can “add greater difficulty”.

“We want to look to see whether there are ways where we can improve how that situation works.”

Campaigners against family violence are outraged by the inquiry, saying it is driven by an agenda that questions the “reality of domestic violence”. They note there have been two high profile, recent inquiries into the family law system. The Australian Law Reform Commission completed an inquiry in April, making 60 recommendations to the federal government.  Parliament also conducted an inquiry as recently as December 2017.

On Wednesday, Ms Batty, whose son Luke was killed by his father, told ABC Radio it was “completely unacceptable” to have another inquiry into the family law system.

“It is completely unacceptable for these politicians with their own agendas to head up any inquiry,” she said, calling on Labor and the Greens to block the inquiry in the Senate.

“We know the failings, we need to start investing in this court system that is broken, overwhelmed and failing. And it is continuing to put families and particularly children in danger,” Ms Batty said.

The Senate is due to consider the inquiry on Wednesday afternoon. It is understood the Labor Party is currently considering its position. The Greens are strongly opposed to the inquiry, with the party’s spokesperson for women, Larissa Waters, describing it as a “dangerous invitation to continue victim shaming, blaming and denial”.