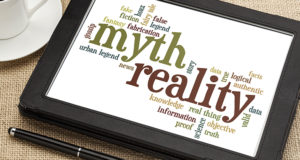 laws in 2006, there has been a decidedly facile campaign of misinformation, sponsored primarily by the advocates of the status quo, and designed evidently to mis-represent the operation of these laws.

Following is a list of 10 common misconceptions about Shared Parenting in Australia, that have been circulated so broadly that they are on the whole accepted as truth, but are none-the-less little more than exceptions, equivocations or categorical falsehoods.

NOT TRUE. There is nothing mandatory about Australia’s Shared Parental Responsibility legislation (Shared Parenting laws). If anything, it has been described as a soft alternative to what was originally preferred by the majority in Parliament in 2006, being a “rebuttable presumption of equal time parenting“, which itself is not mandatory and is determined primarily on whether such an arrangement can be safe, practical and in the child’s best interest.

Since the introduction of these laws, there has been a decidedly deceptive campaign by some journalists and single mother’s groups to mis-represent these laws as being inflexible and mandatory in nature, and as a result forcing Judges to place children into unsafe or impractical parenting arrangements. Terminology such as “mandatory” and “forced with” have often been used in newspaper headlines or opinion pieces to portray these laws in a manner that is quite unequivocally untrue.

The Family Court’s Shared Parental Responsibility Outcomes report underscores the fact that there is nothing mandatory about these laws, where the majority of court outcomes since the introduction of these laws still result in the child residing almost exclusively with the mother.

If these laws were mandatory in any shape or form, one would have expected that close to 100% of court outcomes would have resulted in equal parenting time arrangements, however as evidenced by the Court’s own figures, the figure is significantly less at only 15% of outcomes.

So someone has been fudging the truth to quite a significant degree, and this should be an important point to remember when reading commentary on this debate. Given that some women’s groups have described Australia’s Shared Parenting laws as another form of domestic violence against women, this debate is clearly about something more than what is best for our children, in the eyes of some groups at least. As a result, the misrepresentation of facts, the gender specific vitriol and in some cases the desperate attempt to associate Shared Parenting with Paedophilia, have been unparalleled in this country, even for an issue that is so typically vexed and controversial as family law.

Some have highlighted the child-protective dynamics inherent in Shared Parenting arrangements as being similar to that already recognised in extended family structures. It has been argued that the broader nature of parental responsibility in Shared Parenting arrangements facilitates a natural transparency of care, given that the child is in frequent contact with both parents and the respective extended families.

This ongoing transparency of care optimises the safety and welfare of the children involved, by reducing the possibility of abuse occurring without one of the parents detecting it at an early stage.

These natural checks and balances are unfortunately less prominent (and in many cases non-existent) in Sole Custody arrangements, providing for greater opportunities for child abuse to occur undetected and for greater periods of time, as reflected in the statistics on child abuse.

NOT TRUE. To the parents involved, Shared Parenting arrangements are no different to two-day per-fortnight arrangements in terms of the mechanics of contact and change-overs. Shared Parenting does not in any way increase the time that separated parents need to spend with each other, nor need it involve any physical or proximate contact between the parents.

According to the Australian Institute of Family Studies evaluation of the 2006 Family Law Reforms, a large scale government initiated study into the performance of these reforms, the study found that there was no link between the 2006 Shared Parenting amendments and any increased risk of domestic violence or assault against women and children.

In fact it has been argued that these laws have to a great extent “taken the heat out” of the most vexed issue in separation, namely that of a child’s residence, precisely because of the more balanced and child-centric approach to such determinations.

NOT TRUE. Such comments underlie an element of gender arrogance in suggesting that only mothers can love their children enough to want to spend time with them. To be further made by people purporting to be feminists is beyond belief.

Shared Parenting also shifts a greater proportion of the day to day costs to the fathers.

The overall impact is that Shared Parenting arrangements provide for greater financial investment in the support of their children by fathers, as well as greater emotional, psychological and other forms of support.

The child/ren as a result get more overall support from their fathers, not less.

The frequency of change-overs is IDENTICAL in both cases.

NOT TRUE. The 2006 Shared Parenting laws allow for a broad range of parenting arrangements, from no contact at all up to 7 days per fortnight with each parent, and everything in between. As evidenced by the Family Court’s Shared Parental Responsibility Outcomes report, there is nothing “One Size” about these new laws, which explains why the report was so difficult to compile in the first place.

Conversely, the pre-2006 Sole Custody laws mandated an outcome which was almost universally a “one size fits all” arrangement, that being Sole Custody to the mother and visitation to the father for two days per fortnight. This “standardised” arrangement was the fixed outcome in up to 90% of all child custody Court outcomes prior to 2006.

So let us be clear here, the pre-2006 Sole Custody laws were the entrenched, inflexible “one size fits all” arrangement, whereas the 2006 Shared Parenting amendments opened the gates to a broad range of outcomes, all depending on the unique circumstances of each case.

NOT TRUE. The chances of a father getting any type of meaningful parenting arrangement is still a minority outcome in the Family Courts. 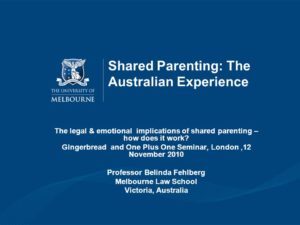 These outcomes in no way support the myth that family laws in Australia favour fathers, indeed it only re-enforces the significant cultural bias that fathers continue to face across the complete spectrum of family, child and domestic regulations in this country.

The sad truth is that many of the institutions that have been set up to protect children’s interests in this country are driven by politicised mores aimed at promoting the welfare of women almost exclusively, relegating the often very real needs of both men and children. It is precisely because of this cultural abhorration that new laws have been required.

It should be emphasised that the danger of not playing the role of impartial adjudicator, of not assessing the facts on their merits, cannot be justified, as some do, as a re-balancing effort, as a minor inconvenience against men to bring equality back into the equation.

This practice is unethical and immoral, and costs lives, the innocent lives of many men and many children, lives that could have and should have been saved.

As sadly witnessed by the Dean Shillingsworth murder (boy in the suitcase), unquestionable signs of imminent danger were completely ignored by Child Protective Services for ideological, gender based reasons.

In this instance the child was placed back into sole care with his mother, despite the mother threatening to kill the child, and despite warnings from the family. The child as a result was murdered by his mother.

According to the NSW Ombudsman report into this murder, he lamented that the child protection authorities were more concerned about the welfare of the mother than her children. He complained that “because their focus was on the mother they lost sight of the risk issues for the children.”

The government in this instance apologised unreservedly to the family for the errors that brought about the murder of this innocent 4 year old child, but unfortunately this cultural under-pinning still pervades the system, at every level.

The sad truth is that the inherent bias in support of women by the System, at the expense of men and children, is just as pervasive as ever, despite the 2006 legislated family law reforms.

NOT TRUE. Australia’s Shared Parenting laws are progressive laws that provide greater independence, support and employment opportunities to all parents after separation, in equal measure, regardless of gender.

Shared Parenting provides a balanced approach to the workload of parenting, providing each parent a regular opportunity to periodically focus on their needs, whether that be employment, education, friendship or relaxation. It is also a progressive development that will empower women to become more than just mothers, and provide women an opportunity to fully engage in the work force to the same extent as men.

It may be a valuable suggestion to those people protesting for equal pay for women in Australia, to take a stronger look at women’s groups themselves as the culprits denying women the opportunity to fully engage in the workforce to the extent that men. If women genuinely want the same employment opportunities and rewards as men, then they should be embracing Shared Parenting laws, not bitterly opposing them. Anything less than this is shear hypocrisy.

One should always remember that Shared Parenting is an extension of the original but now days forgotten feminist mantra that both men and women are equal, and their role in society should not be defined by their gender.

It is of course one of the great ironies that feminist organisations have become one of the most relentless forces against Shared Parenting initiatives across the globe.

NOT TRUE. The 2006 Shared Parenting amendments are about protecting a child’s natural right to a meaningful relationship with both parents.

The previous laws have created a generation of fatherlessness in Australia that is widely accepted as being of significant disadvantage to the welfare of children.

The legislation in this regard makes absolutely no reference to parental rights, but conversely does highlight the paramount consideration of the law to be the child’s best interests.

This is how the LAW is stated, so clearly those people saying otherwise either have not read the law, have not sat through a family court proceeding, or are simply grasping at straws to condemn a system that they oppose for reasons other than what they are willing to say publicly.

NOT TRUE. Shared Parenting laws in Australia have been and continue to be overwhelmingly supported by the public, as evidenced by repeated surveys, polls and government initiated studies.

In fact if the public’s view was to be taken into full account, Australia’s Shared Parenting laws would be strengthened to include a legislated presumption of shared care.

As it stands, on average between 70% to 90% of Australians have consistently provided unwavering support for shared parenting laws in this country, and only a vocal minority with vested interests, including lawyers, feminists and single mothers groups and have opposed such laws.

Sonja is a journalist and counsellor specialising in family law matters. She has contributed many thought-provoking analyses and articles to a wide variety of publications, from print media to numerous online publications.