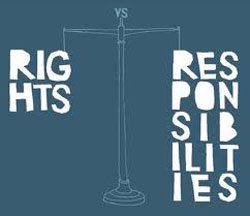 There is a common misconception by parents entering family law litigation of seeking to preserve their parental rights, however this is not the case as the Family Law Act 1975[1] is almost entirely focussed on a parental responsibilities – especially when there is the underlying principle in family law that the “best interests of a child” must come first.

Thus, despite section 51 of the Australian constitution, which introduces the term “parents’ rights”, the Family Law Act instead prioritises the wellbeing of the child in whatever the circumstances of the situation are.

Generally important parental rights tend to arise when family courts consider the “best interests of a child” and what provisions would thus enable that to be reached, such examples include:

The right of ‘spousal maintenance’

This refers to parties of marriage (either husband or wife) being legally obliged to financially support the other under certain circumstances, which are clarified at S72 (1)(a-c)[2] of the Act as;

There are however limits with ‘spousal maintenance’, by financially supporting the other party one should not put such financial pressure on themselves. Courts overcome this problem with what is called a “reasonable able” test.

A case that utilises this is DJM and JLM [1998][3], where the husband appealed the trial judge’s decision of “spousal maintenance” particularly owing to the financial strain it would cause, especially when considering his income and expenses. The court also had to consider other factors such as his wife’s ability to find work and thus financially support herself, but nevertheless the fact that she had to support five kids made it certain to the court of appeal that the husband must contribute. What courts tend to do in such complex situations is find a compromise where costs may be reduced in order to benefit both parties.

The right to spend time with ones child after divorce

The Family Law Act clarifies this notion under ‘parenting orders’ which basically are legal documents that allocate the time a child spends with his/her parents. Parents are both entitled under S65DAA[4] of the Act to spend “substantial and significant” time with their child unless it conflicts the child’s “best interests”.

Essentially, Division 2 of the Act is dedicated to the concept of parental responsibility, which at S61B[5], defines as the “duties, powers, responsibilities and authority” parents may have over a child. This makes parental responsibilities a highly important aspect of the Family Law Act as it directly impacts all decisions and aspects of a child’s upbringing. As a result, a reoccurring motif in this division of the Act is satisfying the “best interest of the child”.

Taking into account the “best interest of the child” under S60CC [6]of the Act; family courts use two categories of consideration in assigning responsibility for parenting orders:

These are the main criteria that a court has to meet in its allocation of parental responsibility; they primarily revolve around the relationship with a child to their parents and also their protection from any harm (which includes both physical and psychological). Primary considerations take priority over Additional consideration such that they must first be satisfied, as in the long run, the court sees them as foundations for Additional considerations.

There are many points under this set of consideration but basically the court here seeks to take into account all possible aspects of a child’s development and thus formulate a manner in allowing the child to attain the best possible upbringing. Secondary factors such as grandparents or other family members affiliated with each parent are brought up under these considerations in assessing the impact a change of lifestyle would have on the child.

Furthermore, courts operate under the presumption of equal shared parental responsibility which can be found at S61DA(1)[9] of the Family Law Act. It is important to consider a common misconception that “equal shared responsibility” translates to equal time with the child. This is not the case, instead the court allocates parental time and money as it sees fit in attaining the “best possible interests” of a child.

To further clarify the issue of a child’s “best interest” consider the case ; Taylor & Barker [2007][10]., which revolves the fairly common issue of relocation between a formerly married couple with an 11 year old child. The mother wanted to move interstate with her child, and therefore away from the father.

The court in its ruling had to consider the “best interest” of the child particularly when it came down to a primary consideration of the Family Law Act that stated that the child ideally should have a “meaningful relationship” with each parent. The judge did not stress upon the details as to why the mother wanted to relocate, but rather, how this relocation would impact on the child’s life. The court determined in its reasoning that despite moving with his mother, the child would still be able to sustain a “meaningful relationship’ with the father if he were to see him in school holidays and thus the mother was granted leave.

What does the reference of “rebuttable presumption of equal shared parental responsibility” in the family law act actually mean?

Equal shared parental responsibility is an inherent principle of the Family Law Act and thus provides a foundation for the structure of parenting orders. It is instituted at S61DA(1) of the Act where both parents are assumed to have an equal say in the welfare of their child’s upbringing. However in circumstances where the “best interests of a child” are compromised, for instance –their safety; the Family Law Act does allow the presumption of equal shared parental responsibility to be rebutted.

This concept of rebuttal is further clarified at S61DA(2)and (4)[11] of the Act where certain conditions must be met in order to have the legal power to override equal shared parental responsibility – it is pivotal to have convincing evidence before the court for the rebuttal to be successful.

What standard of evidence do the courts require for rebutting the presumption?

An answer to this can be found in the case Dundas & Blake 2013][12] which upon trial had the presumption rebutted under the reasoning of “poor of communication” between the parents, which the court determined would result in a dysfunctional upbringing of their child. Whilst on the other hand, the appeal court ruled that it could not restrict a parent’s responsibility merely on the basis of such evidence, but rather the rebuttal can only be reached on “explicit and cogent” grounds that demonstrate that the “best interests” of a child would be potentially threatened .

The most convincing cases of rebuttal revolve around family abuse/violence or instances of violence to the child or another member of the family.